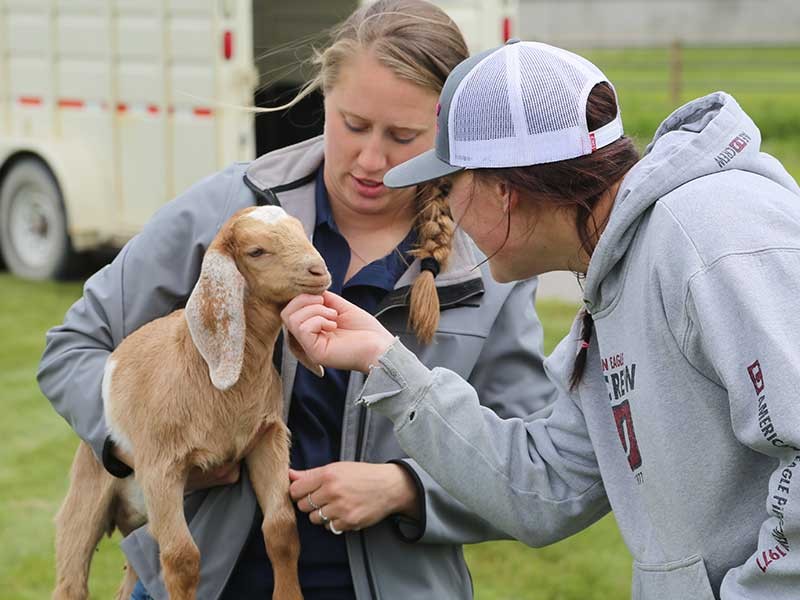 An international gathering of researchers, government regulators and representatives of companies using gene editing focused on the use of emerging technologies in medicine and agriculture at the biennial Large Animal Genetic Engineering Summit in Park City, organized by Utah State University.

Topics such as bioethics, animal models for understanding and fighting human diseases such as cystic fibrosis and atrial fibrillation, breeding cattle to survive in tropical climates, and developing animals that can produce human antibodies for use in medicines were among the topics discussed.

Tad Sonstegard, chief scientific officer of Acceligen, a Recombinetics company working with a commercial gene editing platform, presented his research on thermoregulation in cattle. His team has found a gene mutation that would allow breeds of cattle to survive the harsh climate conditions in countries such as Brazil and Venezuela. He said the prolactin receptor, part of the cattle DNA, is important in the animals’ ability to stay cool in warm climates.

“So what we learned is that if we just snip a little piece of the coding region of that gene out so that it can’t signal, the cow’s thermostat is broken in a way,” Sonstegard said. “It doesn’t know that it’s hot, but it its morphology changes to protect it by having more sweat. We can move that allele into any cattle breed that is going to be raised in a very hot and humid climate.”

If you’ve ever played sports or worked in the hot sun and you didn’t stay hydrated, it’s easy to get heat stroke and even pass out. Sonstegard said cattle in these regions don’t always have immediate access to water.

“If they’re in an intensive production system in a dairy barn, it doesn’t matter if they have the water or not,” Sonstegard said. “They can’t dissipate the heat without fans and sprinklers. In a lot of these less-developed countries those are conditions for dairy systems so those animals are suffering from heat stroke.”

With this new allele, Sonstegard said the ability to regulate temperatures more efficiently is a problem solver for many animal welfare issues in tropical climates. But the production abilities are also more efficient.

“It shows true in dairy; we have data for that,” he said. “With beef we’re not so sure yet, but I would assume it’s going to be the same. I have a colleague in Brazil who uses ear tags that track the movements of animals all day long, 24 hours a day. His Senepol animals are constantly on the move grazing in the middle of the day. Whereas he can track some of his other crossbred animals that don’t have the SLICK allele in the shade.”

Gene editing technology has the potential to satisfy the growing demand for protein in developing countries according to Sonstegard. However, it will take time to develop breed associations and introduce new animal husbandry techniques. He said one of the biggest goals for scientists is positive public perception on developing technologies in agriculture.

Bruce Whitelaw is a biotechnology professor at the University of Edinburgh and deputy director of the Roslin Institute. He said communicating with the public should be every scientist’s priority.

“The most important thing about communicating is to show that we’re not hiding, Whitelaw said. “If there’s a void, someone else will fill it for you. We all learn from each other. As a scientist you know your little minutia of the science that you do, but it’s a big world out there.”

For a long time scientists have stayed in the lab and left communication with the public off their to-do list according to Whitelaw. That’s when public misperception fills the gap of information.

“When we’re talking about GM (genetic modification), one of the images that people keep showing you is the nude mouse with ear on the back,” Whitelaw said. “People go, ‘That’s GM! That’s horrible!’ It’s not GM. It’s a nude mouse with a bit of plastic under its skin and the skin has formed around it. There’s imagery, there are concepts that are just wrong. You have to address that. You’ve got to know why they’re doing that. They were trying to develop ways to repair damaged ears. They’re not trying to give mice big ears.”

“When it comes to livestock, obviously the benefit of a disease-resistant animals is it doesn’t suffer,” Whitelaw said. “Within a population it means more of your animals are viable so you get more product, more meat, more protein, for the same number of animals. If half of them died, it’s a huge waste. It’s an environmental burden.”