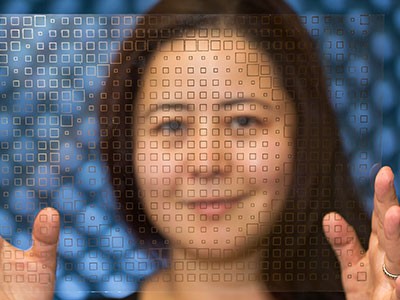 Dr. Reyhan Baktur, associate professor of electrical and computer engineering at USU, has developed a method to print high-gain antennas onto glass.

A researcher at Utah State University is one step closer to solving a complex problem that has puzzled the space industry for decades: How do you equip space satellites with high-gain antennas without the added weight and mechanical complexity of a bulky dish?

Reyhan Baktur, an associate professor of electrical and computer engineering at USU, has developed an innovative solution. She demonstrated how a high-gain antenna can be printed directly onto a satellite’s solar panel. Using a materials printer and conductive ink, she and her team can print a variety of antenna onto virtually any surface, including glass solar panels that power communication and small research satellites, known as CubeSats.

“This concept could eventually replace the heavy, complex antenna structures that are currently used on hundreds of satellites,” she said. “The problem with using conventional antennas and their reflective dishes, is that they’re heavy and they create an additional layer of complexity in which something can go wrong.”

Baktur’s design is simpler. She uses silver-based ink to print antenna elements onto a thin layer of glass that covers the solar panel. The printed antenna weighs much less than the alternative and retains 95 percent or more of the solar panel’s transparency. Printed antennas are also capable of higher data transfer rates — up to 50 megabits per second — much faster than today’s S-band or UHF antenna systems. And they are less expensive to make and can be readily produced in a lab. The units are adaptable and occupy much less surface area on the satellite.

Baktur has been working on the design for several years with funding from NSF and NASA. Her current project is called the Integrated Solar Panel Antenna Array for CubeSats (ISACC) — a collaboration with NASA’s Goddard Space Flight Center. She and her team are now performing rigorous testing of the antennas and are working closely with Goddard to secure a test flight on a CubeSat mission in the near future.

Baktur hopes to expand the technology and develop antennas that can be printed on paper, fabrics, balloons and more.

“We could, for example, print an antenna into a soldier’s uniform so she wouldn’t have to transport heavy antenna equipment into the field,” said Baktur. “We could also print an antenna on a weather balloon or onto the roof of a car or plane. Printing on glass is only the beginning.”

Baktur developed the printed antenna with funding from NSF and NASA.