By Doan Nguyen
Published: Wednesday, September 8, 2004
A Nutrition and Food Sciences professor has been working with USU Public Relations and ASUSU to re-brand and re-package Aggie Ice Cream intending to create a product that would involve Utah State University's students, alumni, and faculty in its process..

"People's reactions seem to show that they really appreciate us asking their input on the product and its image," said Lori Bonham, a senior interning for USU Public Relations and Marketing has found positive responses from survey's given out during the A Day on the Quad event Wednesday.

"I like it because it is an attention getter. I don't know if there is anything I don't like about it," said Juan Franco Vice President of Student Services about the new logo.

There are three remaining illustrated concepts of the ice cream's package. The conceptualized packages, created by Carnegie Communications, will be finalized as the product's label by students, alumni, and facility who can participate in an online marketing survey.

"We are going to include the rich history of Aggie Ice Cream into the new look and traditions," said NFS professor Don McMahon. According to a label on each of the three remaining drafted packages Aggie Ice Cream existed since USU was created in 1888. The first creamery was built in the basement of Old Main. The current creamery is in the NFS building with its own ice cream parlor.

"We will use the proceeds of selling Aggie Ice cream to support the students," Wilkinson said. Such as the hands-on experience students will get from Nutrition and Food Sciences Laboratories and research projects.

Franco likes the campaign because it may provide scholarship opportunities for students. Details on how much and where exactly the money will go have not been designated.

McMahon said a panel will select the top two flavors that are creatable and desirable.

Wilkinson said there will be a taste off at homecoming where students will vote for their favorite flavors, as well as a table set up for Aggie Family Day.

The ice cream naming contest is looking for names that incorporate a relationship to USU or Cache Valley. For example, "French Kiss Me on the A Vanilla" and "Cookies and Cream of the Crop" are some recently submitted names for ice cream.

"I think it's a marvelous idea because it brings more attention to the great Aggie tradition," Franco said he thinks that most people connect the product of Aggie Ice Cream with Utah State University.

Other ideas within the campaign are the creation of Aggie Ice Cream merchandises to sell and selling ice cream cups from a movable cart around campus. 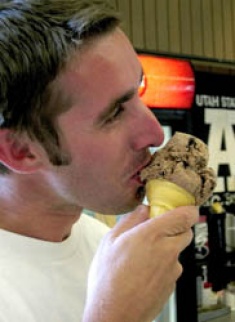