Wading through Antelope Island’s chest-high stalks of yellow-blossomed mullein and gazing out across the shifting, sun-washed colors of the Great Salt Lake, you can almost trick yourself into believing you’ve stumbled into an impossibly remote, exotic land. But the clockwork roar of jet engines departing nearby Salt Lake International repeatedly intrudes upon your thoughts – a rude reminder of your proximity to Utah’s bustling Wasatch Front.

In this high desert refuge, Utah State University doctoral student Amanda Murray keeps a solitary vigil. Perched on Antelope’s craggy, western ridges from dawn to dusk, the wildlife biologist meticulously records the activities of some of the island’s most elusive inhabitants – bighorn sheep.
Murray’s research aims to bolster conservation of the imperiled ovines and contribute to worldwide efforts to successfully relocate other fragile, large mammals. Though necessary as a conservation practice, she says, animal relocation doesn’t come cheap – either in terms of the cost of physically moving the animals or the impact on the animals’ health.
“Moving a bighorn is like an organ transplant,” says Murray, a Quinney Fellow in the College of Natural Resources’ Wildland Resources Department. “The procedure is necessary to maintain the health and survival of the species, but the stress on the animals is high. The risks are tremendous and you want to ensure the best possible outcome.”
The Utah Division of Wildlife Resources introduced California mountain sheep, drawn from herds in British Columbia and Nevada, to Antelope Island about ten years ago. An ideal oasis, it seems, to protect the animals from human-introduced threats and create a thriving nursery herd to replenish areas throughout the American West.
Though the island’s bighorns are not endangered, the species has a precarious history in the Rocky Mountain West.
“The sheep nearly disappeared from Utah by the 1960s,” Murray says.
Overhunting, disease and fragmentation of the animals’ habitat by urbanization and highways led to their decline, she says.
Antelope’s sheep have flourished but the secluded nursery presents a distinct challenge for the animals once they venture into the outside world. The island has no cougars.
True, mountain lions are natural predators of the sheep and a certain number of bighorns are expected to provide sustenance for the hungry cats. “But if the sheep have no innate fear or knowledge of predators, the relocated animals can become an instant feast,” Murray says.
Murray’s work paves the way for continuing study that could one day allow biologists to identify sheep lacking anti-predator behavior and develop anti-predator cues to teach the animals to fear beasts of prey. For now, her research, funded by the Utah chapter of the Foundation for North American Wild Sheep, focuses on identifying the class of animals within a source population that is most successful in a relocation operation.
Ultimately, Murray says, the bighorns’ survival depends on their behavior.
“Our goal is to learn more about these animals and to find the recipe for successful relocation that will allow the animals to thrive in a rapidly changing environment,” she says. “We want to give the sheep a fighting chance.”
Contacts: Amanda Murray, 435-760-6971, almurray.usu@gmail.com; Johan du Toit, 435-797-0242; johan.dutoit@usu.edu.
Writer: Mary-Ann Muffoletto, 435-797-3517, maryann.muffoletto@usu.edu
January 2008 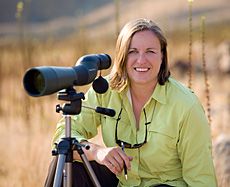 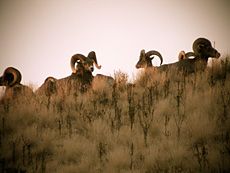 Bighorn sheep, captured in this photo through Murray's spotting scope, encounter unfamiliar predators when relocated from their safe haven on Antelope Island.