On June 3, a cougar wandered into a suburban Salt Lake City neighborhood. A month earlier, a coyote dragged a toddler from her front yard in southern California. The child survived with serious wounds but is expected to recover. Not so fortunate last summer was an 11-year-old boy who was pulled from his tent and killed by a black bear at a Utah campsite.

"Wild animal attacks on humans are rare but as our residential and commercial developments merge with wildlife habitat, and we continue camping and hiking in this habitat, more incidents are likely to occur," says Utah State University professor Robert Schmidt. "The question is – are we paying attention to our wild neighbors and taking steps to prevent conflict?"

Schmidt, a professor in the College of Natural Resources' Department of Environment and Society, likens co-existence among humans and wildlife to a line drawn in the sand.
"We've become increasingly tolerant of wildlife," he says. "A hundred years ago, a homeowner might have pulled out a gun if a wild animal approached. In today's towns and suburbs, it's not only illegal to fire a gun but we enjoy viewing nature – until a conflict arises. Then we draw the line and expect animals to stay on their side."

Unfortunately, animals don't recognize the boundaries of our tolerance.
"As wild animals become increasingly acclimated to human environments they discover that cities and suburban neighborhoods have an abundance of food and shelter," Schmidt says. "They don't know that they're 'encroaching' on human habitat – our side of the line. And if this urban environment allows them to survive and reproduce, they'll keep coming."

Schmidt’s research focuses on conflicts between large predators and people. In one of his current projects, he notes that coyotes are living in increasingly close proximity to humans. He and colleague Robert Timm, a wildlife specialist with the University of California, recently presented "Bad Dogs: Why Do Coyotes and Other Canids Become Unruly?" at the 12th Wildlife Damage Management Conference held in Corpus Christi, Texas.

"Coyote attacks on humans are occurring with disturbing regularity in certain areas," says Schmidt, who was recently appointed to the USDA's National Wildlife Services Advisory Committee. In their study, he and Timm refer to a list of behavioral stages for monitoring coyote aggression toward humans. The guidelines, originally developed by their colleague Rex Baker of California State Polytechnic University at Pomona, offer communities recommended steps to prevent conflicts.

"Most coyotes are timid animals that don't suddenly start biting people," Timm says. "Rather, when living around humans, they often exhibit a gradual escalation of aggressive or predatory behaviors prior to attacks."

The key for residents and management officials, Schmidt and Timm say, is watching for warning signs and taking action – such as discouraging feeding, posting warnings and, if necessary, coyote removal – before the behavior escalates into a problem.

Early warning signs include increased sightings of coyotes wandering the community's streets and yards at night and nighttime incidences of coyotes approaching adults or attacking pets. Further warning signs include increased daytime sightings of coyotes, and coyotes chasing joggers or bicyclists and being unafraid of approaching adults. At this point, Schmidt says, wildlife officials should be notified.

"Coyote activity during the day and increased boldness on the part of the animals in approaching humans and attacking pets is a conflict waiting to happen," he says. "From this point the animals are more likely to attack children."

Knowing what to do when encountering a coyote is problematic.
"It can be difficult to distinguish a coyote from a strange dog – particularly if you're a young child," Schmidt says. "The appropriate response when meeting a coyote is to act aggressively by yelling, waving your arms or throwing stones. Unfortunately, the opposite reaction is recommended when encountering a strange dog."

He encourages parents living in coyote-prone areas to show photos of coyotes to their children to help them recognize the animals. He further recommends that parents practice the appropriate response to the canines when coyotes are observed in a neighborhood. 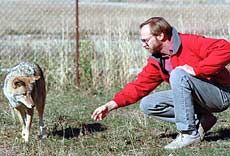