By Ranae Bangerter
Published: Wednesday, April 13, 2005 in The Utah Statesman
Students are seeing the result of recent efforts to give back more space in the Taggart Student Center to students.
An old student lounge, located behind the TSC Auditorium and most recently used as office space, has been remodeled and transformed into a modern, television lounge. The grand opening of the new lounge will be at 11:30 a.m. Wednesday and will feature free Aggie ice cream for those who attend.
"For the last couple of years students have been very interested in getting back more student center kind of space," said Gary Chambers, associate vice president for Student Services about the new lounge. "TVs will be playing all day and you will go in there just to hang out and maybe have a drink or a snack. It's not designed to be a study lounge or a resting lounge."
By replacing an office with televisions, the TSC now sports two remodeled lounges for students to enjoy which both sport wireless Internet access.
"Over the years the Student Center has lost conference rooms and lounge spaces to accommodate more office areas," Chambers said. "The whole idea behind it was to get lounges back for the students and get them a place to kick back and enjoy."
The Juniper Lounge, opened earlier this year and replacing the Cashier's Office on the second floor, was step one in the process of "regaining some of the building back to pure student use," he said.
The new TV lounge was formerly home of the Student Support Services Office, Chambers said. He and others worked to move Student Support Services to the bottom of the University Inn to free up space for a second lounge.
"It's been a wonderful collaborative effort between several different departments to make all of that happen, and really, I think it's come out to be a marvelous win-win situation for everyone who's been involved with the project," Chambers said. "Here are two areas now that [students] can have to relax, study or watch TV," Chambers said.
By painting the walls and adding color through carpet and light fixtures, graduating senior in interior design Kellie Kane, restored the out-dated office space.
Tagg Archibald, Associated Students of USU executive vice president said he and others are also thinking about remodeling the Skyroom.
The Skyroom is most often used in the day during lunchtime, but other than that it's empty, Chambers said.
"Some ASUSU candidates are looking to change the Skyroom into a club atmosphere," said Archibald.
"What we're hoping to do is to have some discussions with Student Services and talk about how we can use that at night to become a real fun hang out location, and still have it available to be used during lunch time to serve meals for the rest of the campus community," Chambers said.
The Skyroom would then have a sports bar and grill, couches, a stage and other things for a club, Archibald said.
"There's some preliminary discussion that's going on with [the Skyroom.] It's very preliminary there's so many other things financially that we're going to have to deal with in the very near future.
"I suspect that, at least from a building standpoint, that it is probably down the road realistically two to three years," Chambers added.
It will require money and serious commitment, Archibald said.
"It could be opened up now. It's dated and the windows all need to be replaced up there," Chambers said.
Chambers said the university wants to use all of the space the TSC has to offer.
"Space is at a premium. It's hard to have enough space to do all you want to do," he added.
"As we develop these individual places, they almost need to take on their own identity and their own uniqueness in order for them to be successful."
Anyone with suggestions for more lounges or the Skyroom sports bar idea can e-mail them to mailto:Taggarchibald@asusuexecc.cc.usu.edu and receive a free bread coupon if they help out, Archibald said.
TSC Lounges in General
"As we talk about a Skyroom location what kind of personality should it take so that we're adding a new dimension rather than trying to duplicate what we already have or they kind of lose their appeal that way," Chambers said.
"Part of the conversation about all of this it, as we develop these individual places they almost need to take on their own identity and their own uniqueness in order for them to be successful," said Chambers.

Media Credit: Photo by Jessica Alexander. ASUSU members break in the new chairs and couches in the new student lounge. The lounge will also have a flat screen TV and vending machines. 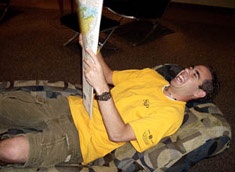 Media Credit: Photo by Jessica Alexander. David Osmond, of ASUSU, reads the paper while testing the La-z boy in the new student lounge in the Taggart Student Center. The lounge will open Wednesday at 11:30 a.m.