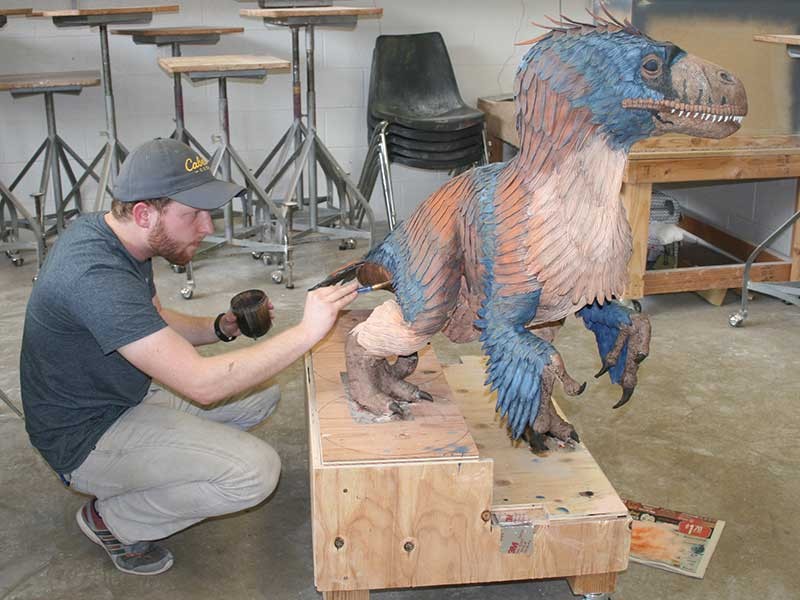 In USU's Sculpture Lab, undergraduate art student Justin Tolman puts the finishing touches on 'Utahraptor,’ his sculpture of Utah’s state dinosaur. The work is unveiled Friday, April 20, at 5 p.m. in the Geology Building, Room 105. All are welcome.

Dinosaurs aren’t monsters, says Utah State University art student Justin Tolman. Rather, they were magnificent creatures worthy of awe and study. Tolman unveils a sculpture of Utahraptor, a dromaeosaurid that inhabited Utah some 125 million years ago, Friday, April 20, at 5 p.m. in the Geology Building, Room 105. All are welcome.

An undergraduate sculpture major, Tolman approached USU’s Department of Geology with the idea of creating Utahraptor more than a year ago and the geologists leapt at the opportunity.

“Dinosaurs capture people’s imaginations and we welcomed the opportunity add Utahraptor to the USU Geology Museum,” says Dave Liddell, Geology professor and museum director. “Many children come through our museum and, who knows? Utahraptor may inspire a future paleontologist.”

The size of an average elementary school-aged human had some bearing on the ultimate size of Tolman’s sculpture.

“The Geology Department envisioned a sculpture that would stand eye-to-eye with a child,” says Tolman, a native of Brigham City, Utah. “So, the finished sculpture will be about three-foot tall, with some additional height from its mounting. The actual raptors measured 15 to 23 feet in length.”

Creating a sculpture of that size presented a challenge. USU doesn’t have a kiln large enough to fire the entire work in one piece. So, Tolman approached his dad, an employee of Orbital ATK Flight Systems in Promontory, Utah, to see if the aerospace company could accommodate such a project.

The company responded with an enthusiastic “yes” and also lent a team of engineers to ensure the oven was kept at a perfect temperature to successfully cure the polymer-based clay sculpture.

“Justin is an amazingly skilled artist, but he hasn’t just applied his imagination to this project,” Liddell says. “He’s done his scientific homework, as well.”

Tolman, who created two “maquettes,” or small, preliminary models, of his sculpture consulted with State Paleontologist James Kirkland of the Utah Geological Survey and USU Eastern paleontologist Ken Carpenter, among others, on the project.

“Among the details we discussed were Utahraptors’ skeletal structure, their behavioral traits, how they held their claws and their outward appearance,” Tolman says. “Some people may be surprised by Utahraptor’s feathers, a theoretical feature of the raptor, yet not a characteristic everyone associates with dinosaurs.”

And how did Tolman select Utahraptor’s colors?

He looked to modern-day raptors – birds of prey – for inspiration. He settled on another Utah native, and one of the state’s most colorful raptors, the American kestrel.

Utahraptor is the culmination of Tolman’s long-time fascination with dinosaurs.

“I’ve loved dinosaurs ever since I can remember,” says the 2010 graduate of Utah’s Box Elder High School. “Our family vacations revolved around visiting every dinosaur museum, monument and site the region has to offer.”

Now, the USU Geology Museum can be added to the list.

“Utah is a treasure trove of paleontology,” Tolman says. 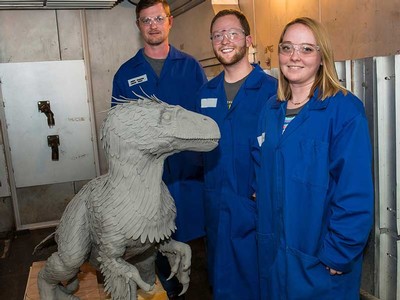 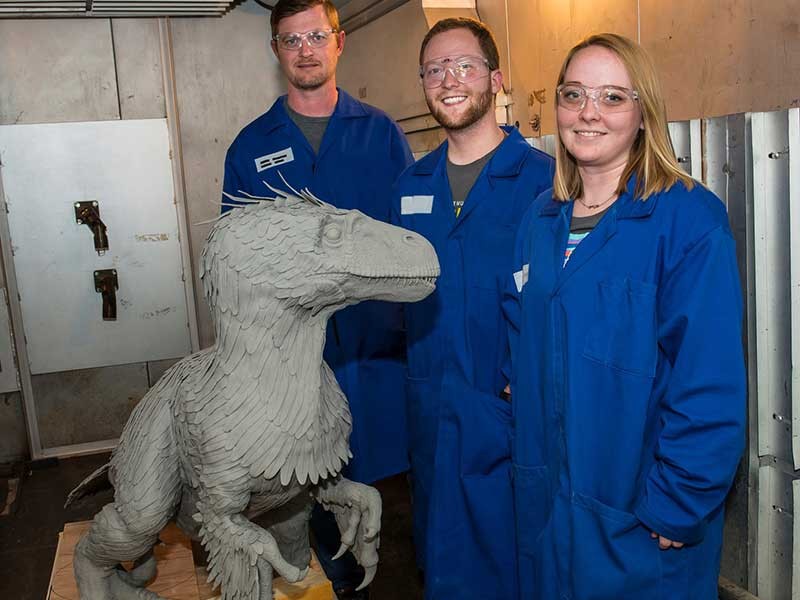