Mitch Dabling and Sarah Mousley are recipients of the award, which is administered by the Barry M. Goldwater Scholarship and Excellence in Education Foundation. Jordan Rozum and Rachel Ward received honorable mention. With this year’s honorees, USU boasts 20 Goldwater Scholars and nine honorable mention recipients since 1998. Dabling is the only civil engineering student nationwide to receive the honor. Mousley was one of twenty mathematics majors to earn the honor.

“This is a tremendous honor for these students and a tremendous honor for Utah State University,” says USU President Stan Albrecht. “This award is a testament to the exceptional achievements of these individuals in academics, research and service, as well as the outstanding mentorship by our faculty members.”

“The Goldwater Scholarship rewards students who have a strong record of undergraduate research,” said Christie Fox, director of USU’s Honors Program. “Our students’ fantastic showing in this year’s competition demonstrates the commitment of our faculty to give students exceptional opportunities to get involved in hands-on research very early in their academic careers.”

Each year, USU may submit up to four nominations for the award; a process coordinated by the USU Honors program that begins in November. Scholarship award recipients receive up to $7,500 toward annual tuition and expenses. The Goldwater Foundation awarded 282 scholarships from a field of 1,123 applicants.

USU’s 2012 honorees, who represent the university’s College of Engineering and College of Science, are members of the USU Honors Program and are active in undergraduate research. All also share their time and talent with fellow students as teachers, tutors and mentors.

“I would play with Legos and KNEX until my thumbs were red and swollen,” says the Syracuse, Utah native. “I still remember the Christmas my dad and I spent eight hours building a KNEX tower taller than I was.”

“My classmate and I spent hours in the garage crafting a sea-worthy raft,” says Dabling, a Presidential Scholar and University Undergraduate Research Fellow, who graduated from Clearfield High School in 2007. “We didn’t capture first place, but our raft held eight students before it sank. That experience and my teacher’s mentorship changed my life.”

At USU, Dabling has excelled in a variety of hydraulic engineering research projects resulting in invitations to present at prestigious academic conferences and publish in professional journals. He “graduated” from cardboard to concrete, as captain of USU’s Concrete Canoe Team, leading Aggies to first place at the 2011 American Society of Civil Engineers Rocky Mountain Region Student Conference. The team qualified to participate in the 2012 National Concrete Canoe Competition; the first USU group to receive this honor.

Beyond engineering studies, Dabling performed in the Aggie Marching Band Drum Line, served as an operating room volunteer and led an Engineers Without Borders team project in Peru.

He plans to pursue doctoral studies in civil engineering and specialize in dam rehabilitation.

“The United States’ dam infrastructure has many inadequacies and I feel I can best help society by making our dams safer,” Dabling says. “After practicing as an engineer, I’d like to return to academia and teach.”

Dabling is the only civil engineering student nationwide to receive the honor.

The self-described “born mathematician” has proved several theorems on the structure of networks.

“With many theorems, I’ve been beaten to the punch; they’ve already been proven,” says the USU Presidential Scholar and University Undergraduate Research Fellow, who graduated from Utah’s Riverton High School in 2009. “But that’s irrelevant because I independently generate my own solutions.”

And though she passionately studies theories crafted by mathematicians of antiquity, Mousley sees herself as an inventor.

“Sometimes my creative energy culminates in nothing more than reinventing the wheel,” she says. “But my goal is to not only understand the work of my predecessors – I want to expand it. I want to be at the forefront of modern mathematics research.”

As a child, Mousley spent summers in self-study, mastering principles of algebra, trig and calculus well ahead of her peers. As an undergrad, she completed a competitive National Science Foundation Research Experience for Undergraduates at the University of North Carolina, Asheville in 2011.

“I coauthored a paper on Hamiltonian graphs that is now under review for publication in a professional  journal,” she says.

Despite her busy schedule, Mousley assists fellow students as an Undergraduate Teaching Fellow, a certified tutor in USU’s Drop-In Math and Stats Tutoring Lab and as a tutor for USU Multicultural Student Services.

Following graduation from USU, she plans to pursue doctoral studies in graph theory, teach and conduct research in pure mathematics at the university level.

Mousley was one of twenty mathematics majors to earn the honor.

As a child growing up in Utah’s Cache Valley, Jordan Rozum remembers looking forward to visits from USU scientists at his elementary school.

“Watching their demonstrations led to my fascination with science,” he says. “In third grade, I read a biography about Albert Einstein that directed my interest toward physics.”

After graduating from InTech Collegiate High School in 2010, Rozum entered USU as a Presidential Scholar and University Undergraduate Research Fellow. His undergraduate research activities in atmospheric physics and astrophysics have included analyzing data collected by a USU Space Dynamics Laboratory-built satellite and study of galaxy geometry.

“I love research, presentation and tutoring,” he says. “I plan to pursue graduate study in physics and math and a career as a professor at a research university.”

Following high school, Rachel Ward took a year off from studies to earn money for college.

“I worked one full-time job and two part-time jobs,” she says. “My goal is to graduate from college debt-free.”

After completing her initial studies at Utah’s Salt Lake Community College, where Ward was named to the President’s List, she entered USU on a Dean’s Transfer Scholarship.

The undergrad has pursued research ranging from rocket science with USU’s Aerospike Engineering Lab to investigation of gravity waves in the Mesosphere with USU’s Center for Atmospheric and Space Sciences.

“I have a strong interest in the medical field as it relates to physics,” she says. “I’m particularly interested in prosthetics development and hope to work in the private sector in this field.” 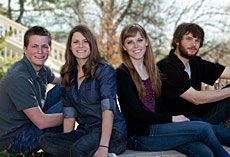