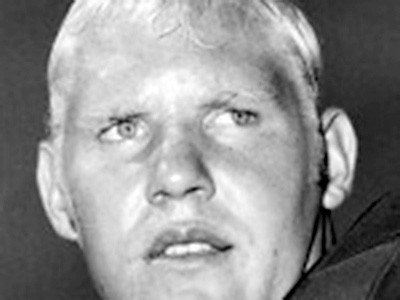 Former Utah State defensive end Phil Olsen is one of 75 players, to go along with six coaches, from the Football Bowl Subdivision to be nominated. Additionally, 95 players and 29 coaches from the divisional ranks made the ballot.

The National Football Foundation (NFF) and College Hall of Fame announced Wednesday [June 1] the names on the 2017 ballot for induction into the College Football Hall of Fame and an Aggie legend made the list.

Former Utah State defensive end Phil Olsen is one of 75 players, along with six coaches, from the Football Bowl Subdivision to be nominated. Additionally, 95 players and 29 coaches from the divisional ranks made the ballot.

“It’s an enormous honor to just be on the ballot when you think that more than 5.12 million people have played college football,” said NFF President and CEO Steve Hatchell. “The hall’s requirement of being a first-team All-American creates a much smaller pool of only 1,500 individuals who are even eligible to be on the ballot, so being in today's elite group means an individual is truly among the greatest to ever have played the game, and we are proud to announce their names. We look forward to announcing the 2017 Hall of Fame Class on the Friday before the College Football Playoff National Championship in Tampa.”

The ballot was emailed this week to the more than 12,000 NFF members and current Hall of Famers whose votes will be tabulated and submitted to the NFF’s Honors Courts, which deliberate and select the class. The FBS Honors Court, chaired by NFF Board Member and College Football Hall of Famer Archie Griffin (Ohio State), and the Divisional Honors Court, chaired by former Marshall head coach, longtime athletics director and NFF Board Member Jack Lengyel, include an elite and geographically diverse pool of athletic administrators, Hall of Famers and members of the media.

“Having a ballot and a voice in the selection of the inductees is one of the most cherished NFF member benefits,” said NFF Chairman Archie Manning, a 1989 Hall of Fame inductee from Mississippi. “There is no group more knowledgeable or passionate about college football than our membership, and the tradition of the ballot helps us engage them in the lofty responsibility of selecting those who have reached the pinnacle of achievement in our sport.”

Olsen lettered three years for the Aggies from 1967-69 and was a 1969 consensus first-team All-American. During his three years in the program, Utah State compiled an overall record of 17-12-1, including two wins apiece over BYU and Utah.

In 1969, Olsen was a team captain, team MVP and the Utah State Athlete of the Year. He was selected to play in both the East-West Shrine Game and Hula Bowl. In Olsen’s junior year, the Aggies went 7-3 and defeated Wisconsin 20-0 for Utah State’s lone win over a school from the Big Ten Conference.

Following his senior season, the native of Logan was drafted in the first round (fourth overall) of the 1970 NFL draft by the Boston Patriots. Olsen went on to play seven seasons in the NFL, including one year with the Patriots, four with the Los Angeles Rams and two with the Denver Broncos.

When he was with the Rams, he played alongside his brother, Merlin, another former Aggie great. Merlin and Phil played side-by-side as defensive tackles for the Rams in 1971 and 1972.

The announcement of the 2017 Hall of Fame Class will be made Friday, Jan. 6, 2017, in Tampa, Fla. The city is serving as host for the CFP National Championship Game, which will be played Jan. 9, 2017, at Raymond James Stadium. Several of the inductees will be on site at the press conference to represent the class and share their thoughts on the announcement. The Jan. 6 event will be televised live, and more information will be available as the date draws near. Inductees will also participate in the pregame festivities and the coin toss on Jan. 9.

Three former Aggies are in the Hall of Fame, including Merlin Olsen, E.L. “Dick” Romney and John Ralston.

To be eligible for the ballot, players must have been named a first-team All-American by a major/national selector as recognized and utilized by the NCAA for their consensus All-America teams; played their last year of intercollegiate football at least 10 years prior; played within the last 50 years and cannot be currently playing professional football. Coaches must have coached a minimum of 10 years and 100 games as a head coach; won at least 60 percent of their games; and be retired from coaching for at least three years. If a coach is retired and over the age of 70, there is no waiting period. If he is over the age of 75, he is eligible as an active coach. In both cases, the candidate’s post-football record as a citizen may also be weighed.