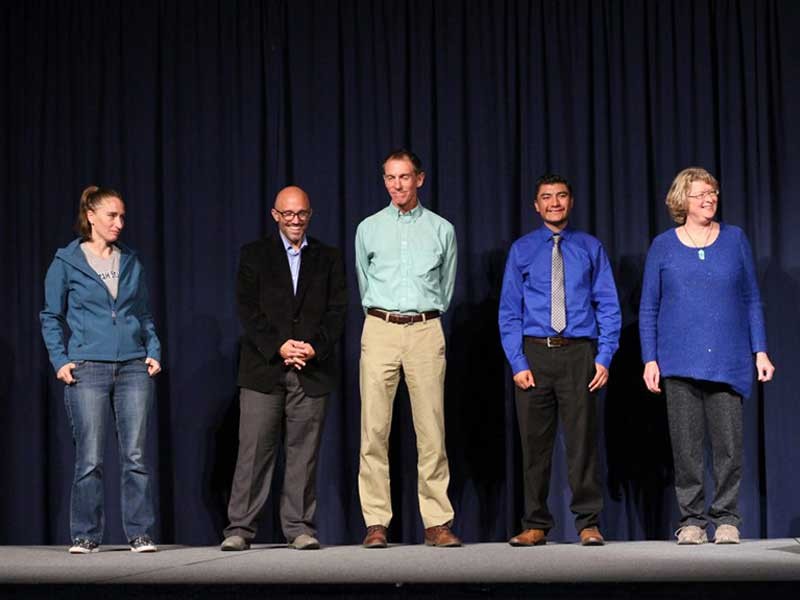 While they may not have super powers or save lives, they are heroes in the eyes of the USU community.

This year, the featured speakers talked about a variety of personal issues and how they overcame them, hitting major topics related to personal, academic and work life. Clinton Behunin, the third speaker of the night, said he was surprised to hear he was nominated and initially thought he wasn’t a hero.

“They had me tell my story and my journey, and I just told it without reservations and edits and told my process of coming to be where I am today,” Behunin said.

Behunin spoke on how he overcame the fear that ruled his life, causing him to fall into an addiction to food as a way of feeling “full” in his life and mask his same-sex attraction. Behunin reported that, by the time he graduated college, he was 360 lbs. and had to get gastric bypass surgery. Following the birth of his second daughter, he decided to pick up running with a few words of advice from his good friend on how to do it: just walk, but faster.

After a year of running, Behunin not only learned that he didn’t need to be afraid of running, but he also lost 200 lbs. and ran his first 5K. Behunin reported that, at that time, he and his friend could each fit into a singular pant leg of his old pair of pants.

“It was just this idea of reframing and redefining my limits and not thinking, ‘No way, you can’t run. You’re too fat. There’s no way you can run.’ No, I can, and I will,” Behunin said. “It was about mastering the body with your mind and allowing your spirit to be the driving force behind it.”

After conquering his addiction to food, Behunin now had to face his sexuality and shared his “coming into story.” Behunin reported that his fear of this was so great that in 2017 he attempted to take his own life. Following this, he and his wife divorced, with her saying that she’d rather have an ex-husband than a dead gay husband, and they remain best friends to his day.

Becca Johnson, a non-traditional graduate student at USU, also shared her story of heartbreak and sorrow and how she came to terms with her grief. After raising three kids together, she and her husband had a late-in-life baby, Wolfgang.  When their son was only three years old, her husband passed away from a heart attack. Later in life, her son was diagnosed with ADHD, autism and more. After years of struggling, Johnson said she decided to go back to school.

“Coming to school is what really helped me to start finding happiness and contentment in my new life,” Johnson said. “I chose to major in instructional technology and learning science because the learning specialist at the Student Support Services had that degree and encouraged me to look into it.”

Johnson said she hopes her story will help others to overcome and come to terms with their grief and encourages others to reach this through counselling, grief support, art therapy and other available resources.

“Healing is not a passive process,” she said. “A lot of people say time heals all wounds, and it is true that it takes time to heal, but you can’t wait your way through it; you actually have to work to heal. But ultimately, broken hearts can heal, and you can find happiness again.”

Other stories told at Aggie Heroes included Geneva Harline, USU folklore graduate, who discussed her long journey to overcome her fear of public speaking. Osvaldo Gonzalez, agricultural major, shared his view on being a Mexican-American not only at USU, but also majoring in agriculture, and wished to express that “agriculture is not a dead end for the Mexican-American community.”

The final speaker of the night, Paul G. Johnson, USU horticulture professor, spoke with the intent of helping the audience become more educated about those with stutters like himself.

Despite the different topics covered, the ultimate goal of Aggie Heroes is to share stories of everyday people overcoming their own personal battles in hopes that those listening become inspired to do the same.

“Overcoming challenges is a process and it does not happen quickly or overnight, by any means,” Behunin said. “It takes a lot of conscious, deliberate, mindful practice, but it will happen, and it gets better. Life gets better.”