The word ‘sustainability’ is bandied about a lot these days in the media and conservation, but what does it really mean? Throughout the fall, Utah State University students in WATS 1200 ? Biodiversity and Sustainability tackled this very question and came up with interesting, and sometimes surprising, answers.

Challenged by instructor Bryan Laub, postdoctoral fellow in USU’s Department of Watershed Sciences, the students explored varied sides of chosen sustainability topics and generated ‘pros’ and ‘cons’ about the use of such products as bottled water, light bulbs and electric cars to such practices as fish farming and sustainable construction. The students presented their findings in a public poster session, “WATS the Story on….?,” in the Natural Resources Building atrium Nov. 25.

“You hear a lot of talk about global warming, but I really didn’t know much about it,” says freshman Jacquelyn McGarry, an undeclared major.

With classmates Logan Thackeray, Michaela Coburn and Jakob Ambuehl, McGarry took on the benefits and drawbacks of bottled water. On the plus side, grabbing a pre-prepared plastic bottle of tasty water is über-handy for busy people. But that convenience has a cost, the students discovered.

“We learned bottled water is expensive compared to tap water, generates an enormous amount of plastic waste and releases thousands of chemicals into the environment,” says Ambuehl, a religious studies major.

But fish farms have their downsides. Most of these, Rigby says, have to do with poor management.

“Crowding can be a problem, along with improper waste disposal,” she says. “But many of those issues are being addressed and some farms, including salmon farms in the Pacific Northwest, now have (the Monterey Bay Aquarium) Seafood Watch recommendation.”

Classmates Walden Hollingshouse, Chloe Hansen and Damion Hobbs put varied kinds of light bulbs to the sustainability test. They concluded compact fluorescent lamps ? known as “CFLs” are versatile and appropriate for most applications, but consumers should also take a look at LED (light emitting diode) lamps.

Hollingshouse adds many are concerned about disposal of CFLs, but what many people may not know is such bulbs are recyclable.

“People worry about the mercury in CFLs,” says the undeclared major. “But it can be reused. You can take used CFLs back to major retailers for recycling. Even the glass can be recycled.” 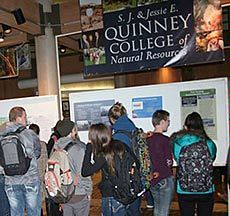 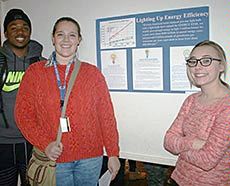