Aggies Advocate for Change of Fate

Holding signs that read, “You’re too pretty to be gay,” “You’re not Mormon? But you’re such a nice person” and “You’re smart, for a Mexican,” USU students marched through the TSC on Wednesday to raise awareness about microaggression.

“We are all capable of saying these types of statements and not knowing how they affect people,” said Lacey Haggan, a marriage and family graduate student who helped plan the event. “These microaggressions are very harmful. People who are saying it and people who are receiving it don’t really recognize it. We are all the victims, but we are all the culprits.”

Before the march, the students gathered in the TSC Auditorium to watch a video called “Changing the Fate of Utah State.” The video showed pictures of students holding posters with micro-aggressive statements that had been directed at them in the past. They told personal stories about encounters with discrimination due to religion, sex, race or otherwise at USU.

During the event, students discussed with each other the microaggressions they faced on campus. Some said they were discriminated against for their disabilities.

“I’ve been discriminated against because I have a service dog,” said Shandrea Hickok, a psychology and environmental science major. “I’ve experienced feedback from a lot of staff and students on campus with my service dog, viewing her as a choice, not understanding why I need her.”

Others said they were discriminated against based on age and physical appearance.

“Some people discriminate against me because of my age because I’m an older student,” said Shauntae Draper, a history education major. “They assume things about my appearance. Because I’m white and I’m married, they assume that I don’t want to be friends with them because we’re different.”

It was difficult for students to share their stories about microaggression, said Sheree Haggan, intern for the Access and Diversity Center and communication major at USU. She said each student who marched with a poster got “emotionally naked” in front of campus.

“To have over sixty people show up and expose themselves for the benefit of all people was huge. Powerful,” Haggan said. “These students did something to change the rest of the world, like Rosa Parks. These students got naked in front of everybody for the betterment of this campus.”

After the video, a guest speaker, Jackie Thompson, addressed the group about the importance of anti-violence and anti-microaggression.

“My heart was sad and cried when I heard some of the microaggressions,” Thompson said. “Prejudice and discrimination is ugly in any shape, form or fashion. Intentional or unintentional.” 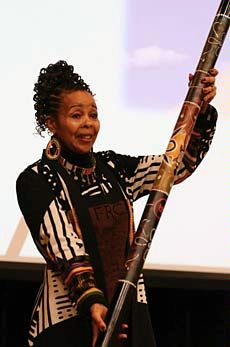 "Mama Jackie," or Jackie Thompson, talks to the crowd at the "Change the Fate" event Wednesday in the TSC Auditorium. (Kylee Larsen photo from the USU Statesman Online)