The undergraduate was among a group of 12 Aggies who traveled July 26-Aug. 7, 2014, to the North Atlantic island nation for a study abroad tour and, yes, the volcano with a 16-letter name, whose eruptions wreaked havoc with European air travel in 2010, was on the itinerary.

“The trip was amazing,” Smith says. “Iceland lies directly on a hotspot and a rift zone — it’s really a mecca for geologists.”

USU geology professor Mary Hubbard began brainstorming plans for the trip almost a year ago with Study Abroad director Kay Forsyth. Students she queried expressed strong interest in the trip, so she and Forsyth continued with budget planning and curriculum development.

“Like most USU study abroad experiences, students bear their own costs, but the Study Abroad office helped us iron out lodging and transportation arrangements,” Hubbard says. “Iceland is quite an exceptional place for geology study because of its location on the Mid-Atlantic Ridge, the presence of active volcanoes and the abundant glaciers.”

In addition to a round-the-island tour of Iceland’s geologic wonders, the USU students met with Icelandic President Ólafur Grímsson, who hosted the Aggies at his official residence, Bessastaðir. The meeting was arranged by Utah's Honorary Icelandic Consul Brent Haymond.

“I thought we would simply greet the president for a few minutes and be on our way, but he actually sat down and met with us for more than an hour,” says undergrad Myka Curtis. “He was very easy-going and funny, asked a lot of questions about our geological studies and offered a tour of his home.”

In addition to the presidential visit, the Aggies met with Andres Thorainsson of Iceland’s Vista Engineering, a company that works closely with Cache Valley data logging manufacturer Campbell Scientific.

During the course of the trip, each student pursued a specific research topic, collected data during the tours, presented to the group and prepared a final report.

“With my partner, Nik, I studied glacial striations,” Curtis says. “We usually found them on rounded rocks protruding from the ground and that’s where we used a Brunton compass — a type of magnetic compass — to take measurements. We’ll use that data to try to determine glacial movement.”

“We plotted GPS locations to see if there’s a correlation between temperature and where the hotspot is located,” she says.

Beyond tours of “breathtaking” sights, the students enjoyed Icelandic culture, including local cuisine.

“Icelandic food is amazingly fresh and delicious,” Olsen says. “We were offered a lot of seafood, horse, whale and puffin — some of it was strange, but you have to open yourself up to new experiences.”

Lamb was also a frequent menu choice — not unfamiliar to Olsen, a Wyoming native, nor to Curtis.

“I’m Native American and I’m used to eating a lot of lamb,” she says. “And I loved the fish.”

During free time following daily research activities, Olsen visited several cemeteries around the country and discovered graves of her ancestors — the oldest dating back to 1724.

“It brought me to tears,” says Olsen, who was granted permission by President Grímsson to search a cemetery on the grounds of his home.

Curtis says her favorite part of the trip was viewing the “phenomenal” geology, including “actually walking on a glacier and through an ice cave.”

“I loved being with people who share my love of geology and talking about what we were seeing and experiencing,” she says. “Getting out of the classroom and participating in hands-on learning in that kind of environment is something I’ll never forget.”

To view photos from the tour, visit the photo gallery on the USU College of Science Facebook page. 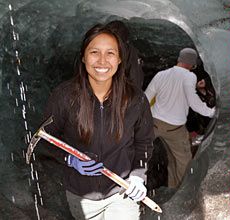 USU geology student Myka Curtis tours an ice cave in Iceland. She was among 12 Aggies who visited the North Atlantic island nation during a summer study abroad trip. 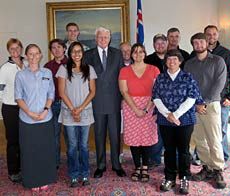