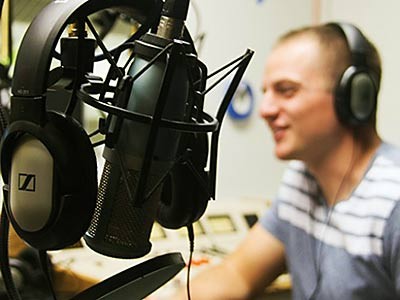 (photo by Annie Hall from the Utah Statesman Online)

By Katherine Lambert in the Utah Statesman Thursday, September 10, 2015

Video killed the radio star, and some Utah State University students want it back.

Aggie Radio Theater is bringing the drama back to radio dials for Utah State University students with shows written and produced by students.

The idea to resurrect radio dramas came from the popularity of podcasts like “Serial,” the true story of high schooler Hae Min Lee’s murder.

“People are not remembering the quality and type of shows that podcasts came from,” Underwood said. “I feel like now with the renewed interest in podcast and audio entertainment, this is the perfect time to reintroduce radio theater in an Internet medium.”

But rather than stick to non-fiction story telling as in “Serial,” the radio theater features three fictional genres: comedy, action drama and suspense.

“Lights Out” is a suspense radio show that actually hails from the golden age of radio in the 1940s. On a scale of “Signs” to “Saw,” the show falls comfortably in “The Twilight Zone,” maintaining its old school episode structure said Jeremy Wald, an engineering junior and radio theater executive producer of the show.

“There’s not going to be a lot of blood and guts and gore,” Wald said. “But it can get pretty creepy.”

Wald and Underwood could barely hold back snickers of anticipated humor as executive producer and psychology and criminal justice junior Serena Johnson began explaining her radio theater show, “On the Quad.”

Set around the lives of a group of freshmen, “On the Quad” is a comedy about “freshmen who have no idea what they’re doing,” Johnson said.

“Definitely when I was a freshman I had no idea how to be an adult,” she said. “There were a lot things that happened that were ridiculous or I couldn’t believe that I had survived my freshman year. With ‘On the Quad’ I was hoping to appeal to all the freshmen who didn’t know exactly what they were doing in life to let them know it’s okay and things are funny and you can laugh at yourself.”

The third show, “Secrets of the Revolution,” took shape while Underwood was in high school through short stories. It takes place during the American Revolution, with bits of history mixed with fictional plot lines.

“It’s like if James Bond was in 1775,” Underwood said. “It’s all about espionage and spying and blowing shit up.”

The radio theater will also air “The Adventures of Superman,” though the episodes will not be altered in any way.

Each of the shows consist of 10 episodes per semester, with each semester making up one season.

The trio will work in conjunction with their writers, directors, voice actors and audio editors to produce the shows beginning mid-October.

Eventually, Underwood said he could see the number of shows, but for now the team is focusing on recruiting the staff they’ll need to make the shows work, with voice actor auditions Friday at 6 p.m. in TSC 323.

“When it comes down to it, the more student man power we have, the more shows we can produce, the higher quality they will be and the more entertaining they will be,” Underwood said.

It took most of the summer, but English creative writing senior Jace Smellie said he feels comfortable working with three other writers for “On the Quad.”

“I think all of us are pretty good at accepting criticism or feedback from writers,” he said. “It’s just about ‘This doesn’t seem to fit the character,’ or ‘This isn’t good for this person.’ It’s a challenge but I think we’ve gotten pretty good about it.”

But to Underwood, the theater radio is all about restoring what the advent of television took out — imagination.

“It’s theater of the mind,” Underwood said. “With audio entertainment, it leaves it to the listener’s imagination to fill in exactly what these people look like, exactly what the scene is.”