Microalgae-based biofuel not only has the potential to quench a sizable chunk of the world’s energy demands, say Utah State University researchers, it’s a potential game-changer.

“That’s because microalgae produces much higher yields of fuel-producing biomass than other sources of alternative fuels and it doesn’t compete with food crops,” says Jeff Moody, who completed a master’s degree in mechanical engineering from USU in May 2014.

With USU faculty mentors Chris McGinty and Jason Quinn, Moody published findings from an unprecedented worldwide microalgae productivity assessment in the May 26, 2014, online Early Edition of the Proceedings of the National Academy of Sciences. The team’s research was supported by the U.S. Department of Energy.

Despite its promise as a biofuel source, the USU investigators questioned whether “pond scum” could be a silver bullet-solution to challenges posed by fossil fuel dependence.

“Our aim wasn’t to debunk existing literature, but to produce a more exhaustive, accurate and realistic assessment of the current global yield of microalgae biomass,” Moody says.

With advisor Quinn, assistant professor in USU’s Department of Mechanical and Aerospace Engineering, Moody began building simulations and generating data. As the project progressed, the engineers realized they needed expertise outside their discipline. They recruited McGinty, associate director of USU’s Remote Sensing/Geographic Information Systems Laboratory in the Department of Wildland Resources, for help in developing the sophisticated spatial interpolations and resource modeling needed to develop their large-scale model.

“Our results were much more conservative than those found in the current literature,” Quinn says. “Even so, the numbers are impressive.”

Algae, he says, yields about 2,500 gallons of biofuel per acre per year in promising locations. In contrast, soybeans yield approximately 63 gallons; corn about 435 gallons.

“In addition, soybeans and corn require arable land that detracts from food production,” Quinn says. “Microalgae can be produced in non-arable areas unsuitable for agriculture.”

The USU researchers estimate untillable land in Brazil, Canada, China and the United States could be used to produce enough algal biofuel to supplement more than 30 percent of those countries’ fuel consumption.

“That’s an impressive percentage from renewable energy,” says Moody, who soon begins a new position as systems engineer for New Mexico’s Sandia National Labs. “Our findings will help to justify the investment in technology development and infrastructure to make algal biofuel a viable fuel source.” 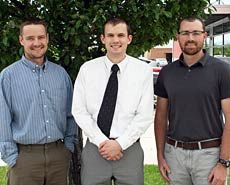 From left, USU researchers Jason Quinn, Jeff Moody and Chris McGinty published findings from a global assessment of microalgae productivity potential in a May 2014 online Early Edition of the 'Proceedings of the National Academy of Sciences.' 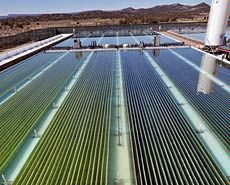