In recognition of a $400,000 donation from The ALSAM Foundation, the Utah State University College of Agriculture announced that part of the Equine Education Center will be named the “Sam Skaggs Family Stable.” The naming was announced at the groundbreaking ceremony for the center Friday, Oct. 9.

The $400,000 donation will be used to complete phase I of the Equine Education Center which will cost $2.9 million. Phase I construction includes the horse stables, as well as a 150-by-300 foot indoor arena and several site improvements. The funding for phase I is fully in place and is a combination of state money and an array of private donations. Construction will begin immediately, with the intent to have the facility completed by early summer 2010. Plans for future development include classrooms, an outdoor arena, additional stalls, round pens and appropriate hay sheds.
“This is such an exciting time for the College of Agriculture,” said Noelle Cockett, USU’s vice president for Extension and Agriculture and dean of the College of Agriculture. “The generous gift from The ALSAM foundation, along with many other gifts from donors at all levels, is making the Equine Education Center a reality. Without them, this magnificent center would not be possible. The center will have a significant impact on the education and training of people in Cache Valley and the region who love horses. We are thrilled to see the new center finally come to life.”
The ALSAM Foundation is named in honor of Aline and L.S. “Sam” Skaggs. The Skaggs family, starting from a small frontier town in southern Idaho, came to have an important impact on merchandising across the United States. Sam will be forever known as the executive who pioneered the first successful combination food and drug store and changed the way America shopped. The Skaggs name became prominent in the 20th century, and the family’s entrepreneurial ambitions became a major retailing force resulting in large, well-known retail chains that carried not only the Skaggs name itself, but names such as Safeway, Osco, PayLess, Albertson’s, Longs Drug Stores and others. The ALSAM Foundation has given hundreds of millions of dollars to education and health research by way of scholarships and the establishment or funding of a wide number of educational and research centers. Skaggs family member Claudia Skaggs Luttrell, a businesswoman who serves on several philanthropic boards, spearheaded the USU donation because of her interest in horses. Luttrell is an accomplished equestrian who has won two U.S. national championships and a Canadian national title.
The center will be located seven miles south of Logan on USU-owned land east of the Matthew Hillyard Animal Teaching and Research Center, which opened in spring 2008. The equine center will be used, in major part, for the USU College of Agriculture’s equine science and management undergraduate teaching program, which will move from its current location in North Logan. The four-year bachelor’s of science degree, approved by the Utah Board of Regents in the spring of 2007, grew from USU’s existing equine program. After the approval, enrollment jumped from 22 students to 37 in one year, and it has risen to 56 enrolled students currently, with anticipated enrollment of 150 students once the center is completed. The program provides students with a series of courses designed to teach practical and up-to-date stable and horse management. However, the academic and riding courses will be available to all USU students regardless of declared major.
In addition to the courses affiliated with the four-year degree, a variety of youth and non-credit horse programs, including those offered through USU Extension, will be housed there. The facility will host community events such as horse show judging, equine nutrition education and USU rodeo and equestrian club activities, as well as USU Extension 4-H horse events.
For more information about USU’s equine program, visit the Web site.
Contact: Noelle Cockett, 435-797-2201, noelle.cockett@usu.edu
Writer: Maren Cartwright, 435-797-1355, maren.cartwright@usu.edu 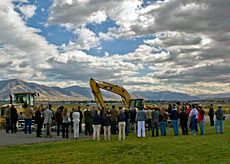