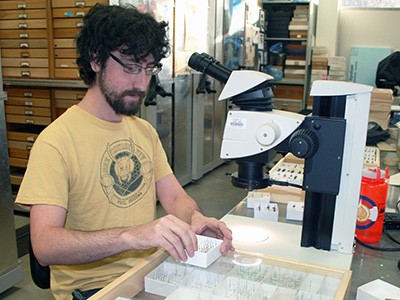 Though declines in bee populations have heightened awareness of the importance of pollinating insects to the world’s food supply, numerous bee species remain undescribed or poorly understood.

With Terry Griswold of the USDA-ARS Pollinating Insects Research Unit at Utah State and John Neff of the Central Texas Melittological Institute in Austin, Portman reports nine, newly identified species of the genus Perdita in the December 23, 2016, issue of Zootaxa. His research was supported by a National Science Foundation Graduate Research Fellowship awarded in 2011 and a Desert Legacy Grant from the Community Foundation.

Unexpected finds include the curious ant-like males of two of the species, which are completely different in appearance from their mates.

“It’s unclear why these males have this unique form, but it could indicate they spend a lot of time in the nest,” Portman says. “We may find more information as we learn more about their nesting biology.”

Some of these bees, found exclusively in North America, sport scientific names inspired by Shakespearean characters, such as Perdita titania, named for the fairy queen from A Midsummer Night’s Dream. Elusive and tiny, Portman tracks the bees by watching for their buzzing shadows in the blinding, midday sunlight the diminutive insects tend to favor.

“Their activity during the hottest part of the day may be a way of avoiding predators,” says the doctoral candidate in USU’s Department of Biology and the USU Ecology Center. “They appear to be important pollinators of desert plants commonly known as ‘Crinklemats.’”

“Like the bees, Tiquilia flowers are very small,” Portman says. “The bees must squeeze into the long, narrow corollas and dunk their heads into the flowers to extract the pollen.”

The scientists report the female bees use pollen collected from the flowers to build up a supply to nourish their young. Once they have completed a pollen provision, the bees lay their eggs on the stash and leave their offspring to fend for themselves.

Portman says the bees have developed a special adaptation called a “hair basket,” with inward-facing, hooked hairs, that allows them to collect pollen as they dive into a flower.

“We don’t yet know if the bees use their legs to scoop pollen into the basket or if they simply collect it using their heads,” he says. “There’s still a lot of unknowns.”

Portman says understanding more about these adaptations between the bees and the flowers they pollinate may be critical to the preservation of their surrounding environment.

Beyond their role as pollinators, he says the bees are interesting from an ecological and evolutionary standpoint due to their adaptations to arid habitats and high contrast color patterns.

“Some of the bees feature stripes and others have spots, which could be patterns for camouflage or a form of mimicry,” Portman says. “These are characteristics we’re still exploring.”

Much of what Portman and his colleagues know about bees of the Perdita genus is built upon the work of the late University of California, Riverside entomologist Phillip Hunter Timberlake. Born in 1883, Timberlake described and named more than 800 bee species during his astounding 70-year career.

“Timberlake was considered eccentric, but his scholarship is to be admired,” Portman says. “Although identifying Perdita and finding the bees’ nests is challenging, these bees have a lot to tell us about adaptation to a harsh and inhospitable environment.” 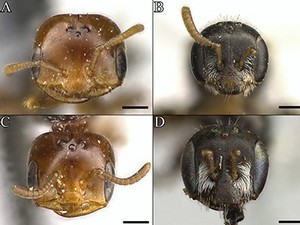 Among Portman's findings are curious, ant-like bees completely different in appearance from their mates. The USU researcher says the bees’ nesting biology may explain these unique forms. 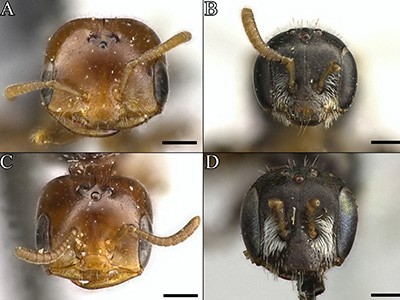