Heady discussions of upper atmospheric dynamics by day and delectable empanadas, grilled meats and musical entertainment by night. That’s how Utah State University physics students Jon Pugmire, Neal Criddle and Thomas Martin and faculty mentor Mike Taylor describe their whirlwind trip to Argentina.
The physicists were invited to present their research at the National Science Foundation-funded Pan-American Advanced Studies Institute School and Workshop on the Dynamics and Chemistry of the Upper Atmosphere hosted Oct. 4-9 by the National University of La Plata in San Juan.
The Aggies were among 30 students from North and South America selected to attend the gathering, which included lectures and roundtable discussions.
“The conference is intended to encourage students interested in pursuing careers in atmospheric and space science, provide them with a forum to share ideas and acquaint them with study and research opportunities available throughout the Americas,” says Taylor, professor in USU’s Department of Physics.
Argentina was chosen as the site for the gathering, he says, in preparation for the installation of a portion of the NSF-funded Advanced Modular Incoherent Scatter Radar, known as “AMISR,” at a site in that country. The modular, mobile radar is intended for use by scientists and students around the world for study of the upper atmosphere and observations of space weather events.
“AMISR is currently installed at sites in Alaska and Canada and preparations are being made to move portions of the instrument to Argentina,” Taylor says.
At the conference, Pugmire, who recently completed a bachelor’s degree in physics at USU and is currently pursuing a graduate degree, presented “First Year Investigation of Gravity Waves and Temperature Variability over the Andes.”
“I’m investigating temperature variability data collected from two cameras at a site in Cerro Pachón, Chile,” he says.
Criddle, an undergraduate physics major, presented research he conducts in collaboration with Pugmire and Taylor.
“We’re studying wave characteristics using a suite of instruments collecting data from Cerro Pachón,” he says.
Martin, also an undergraduate, presented “Investigating short-period gravity wave characteristics over Rothera, Antarctica (68°S).”
“My research is on short period gravity waves captured using a CCD camera over Rothera Station in Antarctica,” he says.
The USU researchers say they enjoyed exploring San Juan, which features wide avenues and pedestrian friendly plazas and shopping areas.
“We noticed that residents observe the afternoon siesta custom and afternoons are quiet,” Criddle says. “But things get livelier in the evenings. Dinners began late, in comparison to the United States, and are leisurely social gatherings lasting into the night.”
Evening entertainment provided by the conference included a symphony performance and a ballroom dance exhibition including —– what else? — the tango, the national dance of Argentina.
“It was a fun and interesting trip,” Pugmire says. “We met students with similar interests, heard about new ideas and I got to practice my Spanish.”
Related links:
USU Department of Physics
USU College of Science
Contact: Mike Taylor, 435-797-3919, mike.taylor@usu.edu
Writer: Mary-Ann Muffoletto, 435-797-3517, maryann.muffoletto@usu.edu 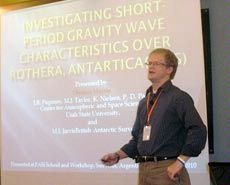 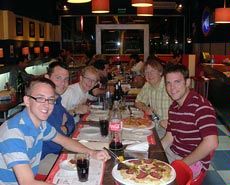