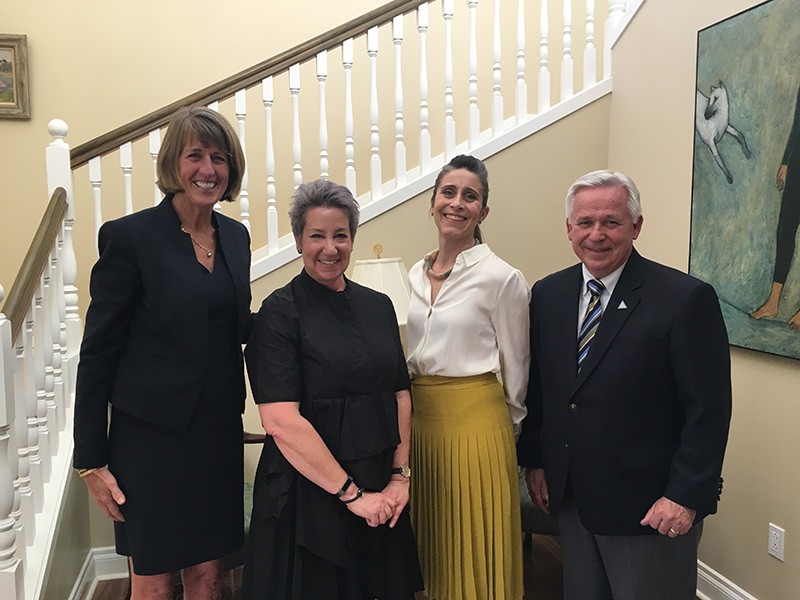 Alexa Sand, art history professor in the Caine College of the Arts, delivered an inaugural lecture on October 26 entitled “Once in a Lifetime.” The lecture was given at the home of USU president Noelle Cockett.

Growing up in Seattle, Sand spent much of her childhood outdoors in the rain. She has always been interested in the visual arts, though her original career ambitions included marine explorer and professional ballerina. At Williams College, she double-majored in anthropology and art history and spent her junior year abroad in Milan and Florence. After some time as a self-proclaimed ski bum and retail sales associate, she attended University of California, Berkeley, where she earned and master’s and doctorate in history of art under the direction of the late Harvey Stahl. Her doctoral research on medieval manuscript illumination then took her to Paris, where she survived a massive transit strike, a solo hitchhiking tour of Burgundy, shellfish poisoning and two of the coldest winters on record in the 20th century. Towards the end of her graduate career, Sand took a brief detour into the business-to-education tech sector, joining a startup that successfully built and launched a college and career counseling online tool.

Eventually, the lure of face-to-face interaction with students drew her back to academia. She has been teaching at USU since 2004 and has settled nicely into the mountain lifestyle with her husband, Albert, and children, Annika and Asher.

Sand’s’s book Vision, Devotion, and Self-Representation in Late Medieval Art was published by Cambridge University Press in 2014. Since coming to USU, she has been the recipient of national fellowships including the AAUW American Fellowship for Publication, the ACLS Charles Ryskamp Fellowship, the Gilbert and Ursula Farfel Fellowship at the Huntington Library and a Paul Mellon Senior Visiting Fellowship at the Center for Advanced Study of the Visual Arts.

In her teaching, she emphasizes student centered learning practices and her longstanding commitment to undergraduate research has led to recognition from students (Mortarboard Society Top Prof Award) and peers (Caine College of the Arts Undergraduate Research Mentor of the Year). She has served on the Council for Undergraduate Research as an arts and humanities councilor and for the past six years, participated actively in a national effort to support and develop research opportunities for undergraduate students across all disciplines. In addition, Sand is involved in the Medieval and Early Modern Studies certificate program and is a corresponding faculty member for the major in religious studies.