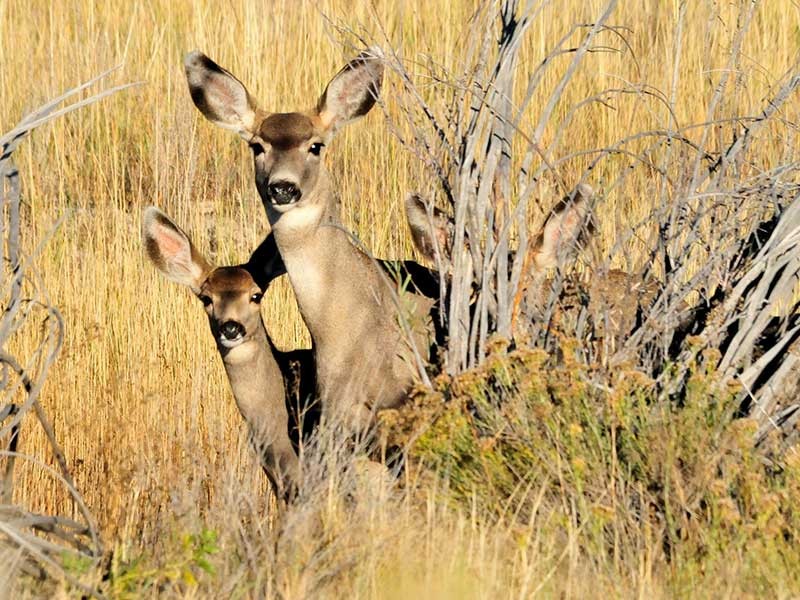 It’s spring, and the flowers are blooming, the grass is green and baby wildlife are out. Spring provides these young animals with favorable conditions and abundant food resources, increasing their chances of survival. Some animals learn survival from their parents, but others receive little or no parental care. Within days or weeks after birth, they will venture into the world on shaky legs or fragile wings. Some will not survive, but those early unsteady steps and flights are part of normal development, as it helps young animals learn to take care of themselves.

Spring also sets the stage for increased human-wildlife interactions as people are outdoors more and encounter baby wildlife. With good intentions, people may have concern about their behavior.

Animal mothers don't want to draw attention to their young so they only visit the nest site when necessary, typically in the early morning and evening. By hiding their young in dense vegetation, they decrease the risk that the babies will be discovered and eaten by a predator. Often, wild animal parents also stay away from their young when people are near. Because of this behavior, the most common species to be mistakenly "kidnapped" by concerned humans are fawns, rabbits and fledgling birds. It is important to be familiar with normal behavior for these animals before assuming they are in need of help. Consider this information about common wildlife.

* Cottontail rabbits are born with no fur and closed eyes, but they mature to independence at only 4 weeks old. The mother may only return at dawn and dusk to a shallow nest on the ground to feed them. The rest of the time, the babies are covered with grass. If you are not sure the mother is returning to the babies, you can place leaves or light sticks over the grass covering. Then check back to see if the nest has been disturbed. If you see a rabbit that appears small, but has its eyes open and is hopping around outside the nest, it is likely independent.

* Songbirds spend about 2 weeks in the nest being fed from dawn to dusk by their parents. At about 2 weeks, they will make their first attempts to fly. Disturbing the nest can force them to leave before they are ready, putting them at risk. During the next few weeks, they will develop their flying skills and muscles by jumping and making short flights. They may spend short periods on the ground or on low shrub branches. They may be easy to approach, as they have little fear of people. However, their parents are keeping a close watch, continuing to feed them as they move around. It is often possible to hear the young birds and their parents vocalizing to each other and, with patience, you may be able to observe them feeding. If a young bird is alert, fully feathered and moving around, and parents are in the vicinity, it is not in need of intervention.

* Does give birth in April and May. The newborn fawns will be hidden away in tall grass or under bushes while the mother is out feeding. They will lie quietly to avoid attracting predators. The doe will return to feed the fawns every 4 to 5 hours and will sometimes move them to a new location. After a few weeks, the fawns will gain strength and accompany the mother. If you find a fawn alone and quiet but alert and without obvious injuries, it is likely doing well. Keep children and pets away, and observe from a distance, as adult does may not approach if people are close by.

* When people with no knowledge or experience attempt to handle or raise wildlife, these well-meaning acts of kindness tend to have the opposite result. Many of the animals that are "rescued" soon die, despite the human’s best efforts. Even if they do survive, mishandled wild animals don't learn normal wild animal behavior. Inappropriate care given to young wildlife often results in abnormal attachment to humans. After release, some return to places where people live, only to be attacked by domestic animals or hit by cars. Some get into stored food, trash cans or dwellings. People have also been injured by tamed wildlife. Further, if they are thrust back into the home range with their own species, they may be greeted as unwelcome intruders.

*Do not consider young wildlife as possible pets. Besides being illegal, wild animals are not well suited for life in captivity and may carry diseases that can be passed on to people. Resist the temptation to take them out of the wild. If you encounter a young wild animal that is injured or orphaned, call a wildlife rehabilitator for advice and help. Wildlife rehabilitators are trained, licensed volunteers and are the only people legally allowed to receive and treat distressed wildlife. They have the expertise and facilities to successfully treat and release wild animals back into the wild, where they belong.

To locate a wildlife rehabilitator in your area, contact the Division of Wildlife Resources.