“Our lab’s motto is ‘Fueling the Next Century of Racing,’” says USU biochemist Alex McCurdy, a doctoral candidate in faculty mentor Lance Seefeldt’s lab. “We’ve done the hard science and now we’re ready to generate excitement about the potential of alternative fuels.”

The team’s motto is a nod to this year’s “Century of Speed” celebration marking the 100th anniversary of Bonneville racing. In 1914, “Terrible” Teddy Tetzlaff broke the then-world land speed mark driving the “Blitzen Benz 2” a scorching 142.8 mph in the raceway’s first sanctioned trial.

As participants in the Bonneville Nationals 2014 Speed Week, the Aggies want to become part of history as well. The annual event, held at the Bonneville Raceway about 120 miles west of Salt Lake City, is a Southern California Timing Association-sanctioned event that draws racing enthusiasts from around the world.

“At the past events, we had tremendous interest from fellow participants and their corporate sponsors in our biofueled vehicle,” says Seefeldt, professor in USU’s Department of Chemistry and Biochemistry. “People were bypassing race cars worth millions of dollars to get a look at the little two-cylinder streamliner Aggie engineers built with a shoestring budget. It was amazing.”

At this year’s event, Utah State will race two vehicles powered by USU-made biodiesel: a 2011 Kawasaki KLR motorcycle with a 0.9 liter Kobuta engine and a 1984 Dodge Rampage subcompact utility truck powered by a 1.5 liter Volkswagen turbo-diesel engine. Both vehicles are privately owned and were offered for use after the owners witnessed the Aggies’ successful racing performances in 2012 and 2013.

“Our goal is to again set speed records using our biofuel and to demonstrate that green fuels can perform as well as or better than fossil-based fuels,” says undergrad biochemist Mike Morgan, also a student in Seefeldt’s lab and driver of the race car that set USU’s previous records.

Morgan and truck owner Steve Menendez will drive the Dodge Rampage during the 2014 trials. Motorcycle owner Kristian Gustavson, founder of Below the Surface, a California-based water conservation group, and Morgan will pilot the Kawasaki. At the past races, Utah State researchers powered their vehicle with biofuels derived from yeast and algae. This year, the biofuels of choice are made from USU-grown algae and safflower, as well as soybean-derived biodiesel supplied by USU sponsor Washakie Renewable Energy.

“We’re tapping years of outstanding research by USU scientists Bruce Bugbee, Ralph Whitesides, Clark Israelsen and Mike Pace, who are perfecting ways to grow and extract the maximum yield from these sources in the most cost-effective manner possible,” says Morgan, who is also a USU Extension research intern working with Whitesides, Extension weeds specialist and professor in USU’s Department of Plants, Soils and Climate.

With Whitesides, Morgan is investigating use of safflower and other oilseed crops, grown in areas unsuitable for tillable agriculture such as highway roadsides and military land, for biodiesel production. The young scholar, who was recently named co-chair of the National Biodiesel Board’s Next Generation Scientists for Biodiesel partnership program, is following in the footsteps of the late USU researcher Dallas Hanks, who pioneered Utah’s innovative “Freeways-to-Fuel” program. Hanks, who died June 25, 2014, from cancer, received posthumous honors from Salt Lake County during the county council’s Aug. 5, meeting.

“You’ll see ‘This One’s for Dallas’ on my helmet and on the truck at Bonneville,” says Morgan. “Dallas was a great mentor to me and I’m humbled and proud to carry on his legacy.”

Among the fans cheering on the Aggies at Speed Week will be newly crowned Miss Utah Karlie Major, a Utah State University student and dirt bike enthusiast.

“To my knowledge, I’ll be the first Miss Utah at Speed Week,” says Major, a third generation Aggie. “I’ll be collecting footage for my reign’s end-of-year video that highlights unique places I visited and experiences I had. What better place than the Bonneville Salt Flats and USU’s research to express what’s special about our state?”

USU has organized a “Media Day” for journalists Wednesday, Aug. 13, during Speed Week. For credentialing and schedule information, contact JoAnn Carlson, media officer for SCTA/BNI, at 559-528-6279 or media@scta-bni.org prior to the event and 435-890-9159 during Speed Week.

Speed Week events are open to the public. Tickets are $20 per person per day or $50 for the week. More information is available on the SCTA website. 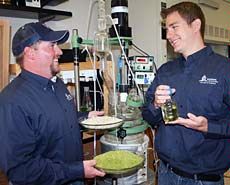 USU biochemists Mike Morgan, left, and Alex McCurdy are making biodiesel from safflower and algae to power vehicles during Utah's 2014 Speed Week at the Bonneville Salt Flats raceway. The Aggies hope to set speed records with the USU-made biofuels. 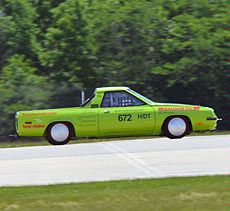 Pictured is a privately owned Dodge Rampage retrofitted with a diesel engine Aggies will race with USU-made biodiesel at Utah's Speed Week. The USU scientists are showcasing the growing potential and improving performance of biofuels.