News stories describing the honey bee and its decline due to the mysterious Colony Collapse Disorder abound. Less has been published about its counterpart the bumble bee, but the latter’s decreasing abundance is equally dramatic according to a recent study by Utah State University researchers and colleagues.

“Our findings indicate a 96 percent decline in four common North American bumble bee species in just the past few decades,” says Jamie Strange, USDA-ARS research entomologist and adjunct assistant professor in USU’s Biology Department. “Investigators have been unable to find some of these species in their previous homes, including the West Coast, and a fifth species may be extinct.”

Strange, USDA-ARS colleague Terry Griswold and USU biology graduate student Jonathan Koch are among authors of “Patterns of Widespread Decline in North American Bumble Bees” published in the Jan. 3, 2011, issue of Proceedings of the National Academy of Sciences. The article details findings from a federally funded study the scientists conducted with colleagues at the University of Illinois.

The comprehensive census, which began in 2006, covered the nation’s lower 48 states. Subsequent surveys of the continuing study, not included in the Jan. 3 paper, include Alaska.

“It’s probably the largest study of bumble bees that’s ever been attempted in terms of geographic scope and standardized approach,” says Koch, who is crafting his master’s thesis from the project. “We collected data at 382 sites.”

Honey bees have a long history of agricultural use, whereas commercial use of bumble bees is relatively new, Griswold says. “Less is known and less attention has been paid to bumble bees.”

The implications of the decline of both honey and bumble bee populations are chilling, as an estimated third of the human food supply is dependent on bee pollination.

The USU researchers say the cause of bumble bee decline remains unclear. They suspect a combination of forces, including pathogens, intensive agriculture and other shifts in land use, as well as climate change.

“It’s probably a suite of factors,” Strange says. “And there could be causes that we haven’t yet identified.”

Among the study’s findings is decreasing genetic diversity in bumble bee populations.

“We don’t know if this is a cause or an effect of species decline,” he says. “But the reduction means that the bees are less able to adapt to changing conditions and to fight off any new pathogens.”

The study required comparison of census results with museum records of bee populations.

“Jon (Koch) did an incredible job of gathering data from existing collections around the country and mapping historical bee distributions,” Griswold says. “The database he developed will be valuable for continued study.” 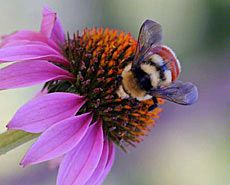 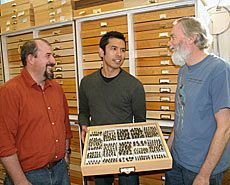