USU physicist Tsung-Cheng “T.C.” Shen notes that Isaac Newton wasn’t thinking about diesel locomotives, Apollo moon missions or space shuttles when the 17th century-born scientist described gravity and the laws of motion. Nor was Albert Einstein considering CD players, bar code scanners and laser surgery when he wrote about stimulated emissions – a theory that preceded the development of laser technology.
“Science and technology are intricately linked but they’re not equivalent,” Shen told family and friends who joined him Oct. 11 at the President’s Home for the second talk in Utah State University’s 2007-08 Inaugural Professor Lecture Series. The series highlights the accomplishments of university faculty who have been promoted to full professor in the past year.
“If you look at the top 20 engineering achievements of the 20th century, except for lasers, nuclear energy technology, solid state devices and high performance materials, all are based on 19th century physics,” says Shen, who joined USU’s Physics Department faculty in 1998.
Technology can’t always be planned, he says, and often grows out of basic research – though not always right away. While new technologies are needed to address a variety of challenges, including energy sources, carbon sequestration, biotechnology and more, a rush to commercialization may not yield ready answers.
“Just because research results don’t show an immediate benefit or application, that doesn’t mean the knowledge gained isn’t valuable,” Shen says.
He notes scientific progress and the resultant technological progress require not only investment in infrastructure, including labs and equipment, but a climate that fosters sharing of ideas among scientists and engineers from a variety of disciplines.
“I hope we can recognize the importance of creating such environments on campus,” Shen says. “This will enable opportunities to continue to explore basic sciences and eventually convert basic sciences into innovative technologies.”
In the 20th century, physicists made great strides in understanding the basic building blocks of the universe and its interactions, Shen says. “In the next century, our challenge is to understand more complicated systems, such as biological systems.”
Increased pursuit of nanoscience, he says, is critical to the development of future technologies. He foresees the need for technology to control wave functions of electrons and photons and grow materials with novel mechanical, electrical and optical properties for future applications in information technology.
“Physics, in particular, is affecting nanotechnology,” says Shen, who heads USU’s Nanoelectronics Laboratory. His current research involves surface physics, low-temperature carrier transport and nanofabrication of electronic devices.
The lab uses scanning tunneling microscopy or “STM.” Employing principles of quantum mechanics, STM is a non-optical technique that uses an electrical probe to scan a surface and detect weak electric currents flowing between the tip and the surface. Invented in 1981, STM enables physicists to capture images of individual atoms.
“It’s cutting-edge research,” Shen says. “My dream is for USU to create an interdisciplinary facility that focuses on nanoscale characterization and fabrication.”
He credits the post-World War II build-up of U.S. educational programs in science and mathematics from middle school to post-graduate levels and investment in research facilities for the technological prowess the country enjoys today.
“But we can’t take the current advantage we’ve accumulated over the past 60 years for granted,” Shen says. “If we don’t invest in education, equipment and labs, we’ll fall behind emerging global competitors such as China and India.”
A native of Taiwan, Shen earned a bachelor’s degree from National Taiwan University and a master’s from National Tsing Hua University. He pursued doctoral studies in theoretical gravitational theory at the University of Maryland, where he completed his doctorate in 1985.
Shen has published many peer-reviewed articles in scientific journals.
Related links:
Contact: T.C. Shen [tcshen@cc.usu.edu], 435-797-7852
Writer: Mary-Ann Muffoletto [maryann.muffoletto@usu.edu], 435-797-1429 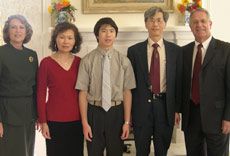 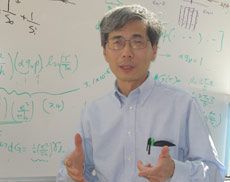