The Student Life section of Utah State Today highlights work written by a talented student journalist at Utah State University. Each week, the editor selects a story that has been published in The Utah Statesman or the Hard News Cafe' for inclusion in Utah State Today.
Bear's Grave Offers Historical Folklore Experience
By: Brittny Goodsell Jones in The Utah Statesman, April 23, 2008, Section: Features
All Frank Clark had was a .25-35 caliber carbine loaded with seven steel ball cartridges. He had shoes on, but in his nervousness forgot to put on his trousers. And with that, he walked up the mountain trail in Cache National Forest in the middle of the night of Aug. 21, 1931, after he heard a roar and a groan coming from a mile away. According to his personal record, Clark said he left his camp because he thought the sounds came from a horse that had fallen down. But after Clark passed the creek, he said he knew it wasn't a horse.

It was a bear caught in a 23-pound bear trap.

And his name was "Old Ephraim."

"Old Ephraim" was a bear who killed numerous sheep and cattle in Logan Canyon in the early 1900s. The record states although the bear had been hunted for years, "Old Ephraim" had a knack for throwing or removing bear traps.

But on the evening Clark found the 1,100-pound bear, he said he knew "Old Ephraim" must have finally stumbled into a trap, since Clark heard massive groaning coming from the bear. At first, Clark said he first didn't know what to do. Besides his gun, he only had his sheep dog to help protect him. The closest human being was three miles away, he said, and the almost 10-foot bear blocked the way back to camp.

"I listened and could hear the chain rattle and so did my teeth," Clark's record states.

Clark said he decided to walk up the hillside and wait for daylight for a better chance to shoot "Old Ephraim." Once the sun hit the area where the bear was, Clark said he started to throw sticks near it, hoping to scare the bear out so Clark could get a shot at him. Eventually, Clark said the bear slipped out of his hiding place and went down to Clark's tent. Clark said he followed and when he got closer, Clark shot at a small patch of fur. But he said he only grazed the bear's shoulder.

"And now for the greatest fear of my life, Ephraim raised up on his hind legs with his back to me and a 14-foot long chain wound around his right arm as carefully as a man would have done it and a 23-pound bear trap on his foot, standing 9-feet-11-inches high," the record states. "He could have gone that way and have gotten away but he turned around and I saw the most magnificent sight that any man could ever see. I was paralyzed with fear and couldn't raise my gun and he was coming, still on his hind legs, holding that cussed trap above his head."
Clark said the bear only had a four-foot bank to climb up until he could reach him.

"I was rooted to the earth and let him come within six feet of me before I stuck the gun out and pulled the trigger," the record states.

Even though the bear fell backwards, he came toward Clark again and received five more bullets. But now, the bear had reached the trail and was still coming towards Clark.

And Clark only had one cartridge left.

So he started to run.

He said he ran about 20 yards and turned back to see the bear still rambling toward him. But by now, the bear turned toward the dog since it had been snapping at his heels. Clark said he quickly turned back and as he approached the bear, it left the dog alone and turned on Clark again.

"I could see that he was badly hurt as at each breath the blood would spout from his nostrils, so I gave him the last bullet in the brain.

"I felt sorry I had to do it," the record states.

This is the story of "Old Ephraim," the Cache Valley grizzly whose large skull sat in the Smithsonian Institute in Washington, D.C., from the 1920s until the mid 1970s. Now, the skull has a home in USU's Special Collections located in the basement of the Merrill-Cazier Library.

This account is from Clark, the man from Idaho responsible for ending "Old Ephraim's" life.

But Bob Parson said this story gets told by others with more folklore than fact.

"He gets bigger every time the story is told," Parson, university archivist, said. "The facts are so intermingled with the story that [they] are hard to separate."

Parson said Clark's personal record of that night comes from a document that USU Special Collections and Archives have had for a long time. Originally, Parson said Clark's account was published in the Herald Journal in the 1950s.

Even though this happened more than 70 years ago, people can still visit "Old Ephraim." Well, at least his grave.

According to a Logan Canyon pamphlet, a 10-foot stone monument was built in the 1960s by local Boy Scouts to mark "Old Ephraim's" grave site. However, Parson said he doesn't know if "Old Ephraim" is actually buried underneath the stone. After being skinned, "Old Ephraim" was burned, he said.

"I don't know how close the monument is to where they burned him," Parson said.

It was after the burning and the burial that "Old Ephraim's" skull was dug up to take to the Smithsonian.

The pamphlet states the rock monument is found through numerous trails throughout the valley. However, the most popular trails to use are Temple Fork Road and Right Hand Fork Trailhead, both beginning in Logan Canyon.

Lisa Perez, conservation education coordinator at Logan Ranger District, said people have hiked and biked to the monument but that four-wheel drive vehicles or ATV's are required on this road if visitors wish to drive to the monument.

"There have been sightings of families trying to get up there in station wagons," Perez said. "You just can't do that."

Perez said the length is five miles one way, so visitors should plan a few hours for this activity.

Snow is also a factor to consider when visiting. A member of the Logan Ranger District Office said there are currently 57 inches of snow around "Old Ephraim's" monument. The member said she recommends not visiting the monument until at least some time in June.

For more information or for a copy of the legend, contact University Archives at 797-2663 or the Cache Valley Visitors Bureau at 755-1890. For further trail information, contact the Logan Ranger District at 755-3620.

And when visiting the monument, don't forget your trousers. 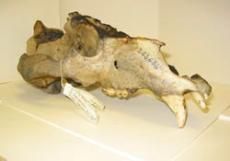