Utah State University alum Dallas Hanks ’91 MS, ’10 PhD, has returned home to Burley, Idaho. In the familiar comfort of his parents’ home along the Snake River, the founder of USU’s Center for Agronomic and Woody Biofuels is battling end-stage cancer.

Hanks’ condition no longer affords him the strength to freely wander the furrowed fields of the family dairy farm. But head on a pillow, telephone propped to his ear, the 51-year-old continues to share his innovative biofuels project ideas — namely, using untillable land to grow biofuel feedstock plants.

“Dallas has never been afraid to cold call someone to share his vision,” says USU undergraduate Mike Morgan. “His ideas are amazing and everything he’s tried has worked. He’s built an extensive national network of colleagues in diverse disciplines, agencies and institutions that’s a perfect foundation to launch his projects.”

Morgan and Hanks met, not at Utah State, but at the 2012 National Biodiesel Board annual conference in Las Vegas.

“We hit it off immediately,” says Morgan, a biochemistry major, who was recently named co-chair of the NBB’s Next Generation Scientists for Biodiesel partnership program. “Dallas introduced me to his former faculty advisor, Ralph Whitesides, and the innovative ‘Freeways to Fuel’ program.”

With Whitesides, a professor in USU’s Department of Plants, Soils and Climate and Extension weed specialist, Hanks approached the Utah Department of Transportation with his idea of using roadsides to grow plants for biofuel. UDOT responded with enthusiasm and the ‘Freeways to Fuel’ program was initiated in 2007.

Morgan, who secured a USU Extension internship with Whitesides this summer, is following in Hanks’ path. The undergraduate researcher, who also works in the lab of USU biochemistry professor Lance Seefeldt, is investigating use of land at the Salt Lake City International Airport to grow safflower and other crops for biofuel.

But the project, a partnership with USU, the U.S. Department of Agriculture and the airport, isn’t just an effort to produce renewable fuel. A complementary goal is to reduce rodents in fields surrounding the busy air traffic hub — by growing plants the animals don’t like to eat — and thereby deter predatory birds from entering the area’s airspace.

“Our aim is to protect aircraft from bird strikes, while using land unsuitable for food crops for biofuel feedstock production,” Morgan says. “It’s a winning combination. It’s a no-till operation that preserves ground water, the biofuel we produce will offset the need for conventional diesel to maintain the area and the whole project will reduce maintenance costs.”

The project, which “came together quickly,” Morgan says, is a perfect outgrowth of USU expertise.

“We’re tapping years of fantastic research by such USU researchers as Clark Israelsen and Mike Pace in safflower production,” he says. “An added bonus is safflower is a thistle, it doesn’t affect food supply and demand like corn or soybeans and deer don’t like it — which is also an advantage in a highly traveled area.”

The project isn’t Morgan’s first foray into biofuel feedstock production. In Seefeldt’s lab, he is contributing to biofuel production from yeast and algae. In fact, the Hyrum, Utah, native, who graduated from Mountain Crest High School in 2005, drove the USU-engineered “Aggie A-Salt” race car, powered in separate trials by USU-produced yeast and algae biodiesel, to land speed records on Utah’s Bonneville Salt Flats in 2012 and 2013.

“Dr. Seefeldt has always encouraged us to look beyond our lab at other groups around campus involved in aspects of biofuel research,” Morgan says. “He’s taught us the value of crossing disciplinary boundaries and seeking new ideas.”

USU’s efforts are particularly timely, he says, as the U.S. Environmental Protection Agency considers changes to the Renewable Fuel Standard.

“This decision will have a big impact on biofuel research,” Morgan says.

As for USU, he sees a bright future for the university’s efforts.

“Our varied biofuel projects will open new opportunities to go after funding,” Morgan says. “Throughout campus, we have a lot of strong pieces of a puzzle fitting into a larger picture.”

**Editor’s note: Utah State University is saddened to report the death of alum Dallas Hanks ’91 MS, ’10 PhD, on June 25, 2014, following a long battle with cancer. Dallas was the founder of USU’s Center for Agronomic and Woody Biofuels and Utah’s ‘Freeways to Fuel’ project. He inspired colleagues and students with his innovative use of untillable land to grow biofuel feedstock plants. The National Biofuels Foundation honors the Burley, Idaho, native with the Next Generation of Scientists Dallas Hanks Memorial Fund to perpetuate Dallas’s vision by supporting student efforts in biofuels research. A full obituary is online. 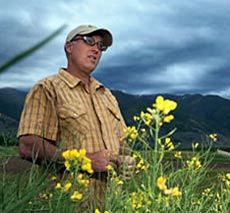 USU alum Dallas Hanks has pioneered the university's efforts in growing crops in untillable areas for biofuel production. His innovative ideas, including the 'Freeways to Fuel’ program, are inspiring other researchers. 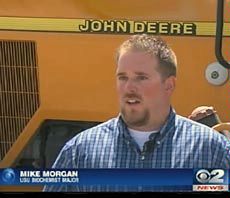