For migratory animals, timing is everything. Species commuting between highly seasonal environments strive to arrive at springtime destinations during peak availability of food and conditions conducive to breeding, nesting and rearing offspring. The challenge is compounded when spring arrives much earlier than the weary travelers.

“This is a global phenomenon known as ‘trophic mismatch,’” says Utah State University ecologist Karen Beard. “Climate change appears to be accelerating its occurrence and it is particularly affecting Arctic wildlife.”

Recent studies target the effects of trophic mismatch on specific species, but Beard and colleague Jeffrey Welker of the University of Alaska Anchorage are exploring a broad view of its implications for biogeochemical cycling on Arctic ecosystems. The researchers were recently awarded a three-year, $1.5 million grant from the National Science Foundation to study the wetland tundra of western Alaska’s Yukon-Kuskokwim or “Y-K” Delta.

“The Y-K Delta is one of the largest river deltas in the world and is roughly the size of Oregon,” says Beard, associate professor in USU’s Department of Wildland Resources and Ecology Center. “Historically, the delta and other Arctic regions have been viewed as carbon sinks; that is, systems that store carbon.”

But trophic mismatch could change that, transforming such regions into carbon sources.

“These evolving conditions and interactions between species could have dramatic consequences for carbon and nitrogen cycling in Arctic systems,” she says.

For the study, which begins in February 2014, Beard and Welker are investigating interactions between black brant geese and delta wetlands teeming with a grass-like plant called sedge, a favorite food and nesting material for the birds.

“The geese eat huge swaths of sedge and create ‘grazing lawns,’” she says. “They look almost like putting greens.”

The birds’ voracious appetite might appear to spell doom for the vegetation but Beard says the opposite is true.

The researchers are investigating what could happen if trophic mismatch alters these interactions. Using sedge test plots, they will manipulate the timing of the growing season and goose arrival to determine how carbon uptake and release will change under these different conditions.

In the remote region, located some 500 miles west of Anchorage and marbled with endless webs of winding waterways, getting personnel and gear to the research site is a major undertaking.

“Early in spring, snowmobiles are used to transport supplies and equipment to the site,” Beard says. “Float planes fly us out and daily transportation is mostly in small skiffs. Our team will be living in heavy duty tents for weeks at a time without running water and electricity.”

Situated near the coast of the Bering Sea, the wind blows relentlessly.

“It’s pretty hard core conditions,” Beard says. “It can get quite cold even though it’s summer and you get hit with the occasional downpour. But it can also be sunny until midnight and the crew has a great time.”

In addition to her new project, the scientist has been elected to the Society for Conservation Biology Board of Governors. Beard has served on the SCB’s North America Section board of directors and looks forward to the new post with the 10,000-member-strong global scientific society.

“I’ve been asked to chair the Science and Publications Committee and I’m excited about that — it’s right up my alley,” she says. “Our committee’s responsibility is to ensure the society’s journals remain top-tier.” 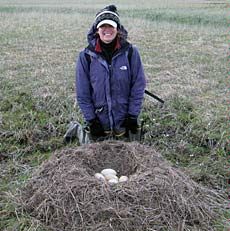 USU ecologist Karen Beard poses beside a tundra swan nest in Alaska's Yukon-Kuskokwin Delta. Beard is leading a $1.5 million NSF-funded study on the effects of climate-induced trophic mismatch in the massive region of wetland tundra. 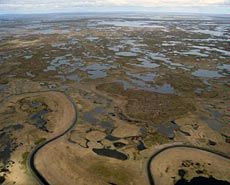 From the air, Alaska's Yukon-Kuskokwim or 'Y-K’ Delta appears as an endless web of winding waterways. USU ecologist Karen Beard is conducting a study in the region, which is about the size of Oregon and one of the world’s largest river deltas.