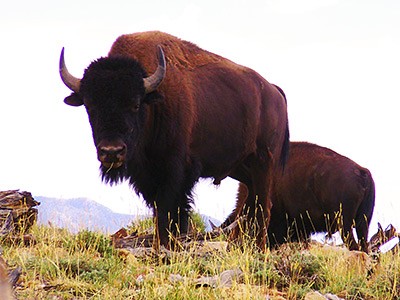 Bison of Utah's Henry Mountains are descendants of animals transplanted to the area from Yellowstone National Park in 1941. USU ecologists, supported by the Utah Division of Wildlife Resources, are studying the animals. Photo by Dustin Ranglack.

If bison lumber through a patch of rangeland, you’ll know it, says Utah State University ecologist Dustin Ranglack. A mature bull, after all, often weighs a ton.

“Bison have a very conspicuous presence on the landscape,” says Ranglack, who completed his doctorate in ecology in Dec. 2014 from USU’s Department of Wildland Resources and Ecology Center. “With their herding behavior, dust wallowing, trampling and big dung pats, they’re hard to ignore.”

But that’s not the case, Ranglack says. The biggest consumer, he discovered after two years of study, is actually the much smaller, and less conspicuous, rabbit. With faculty mentor Johan du Toit, professor in USU’s Department of Wildland Resources and Ecology Center, and USU statistician Susan Durham, Ranglack published findings in the Jan. 26, 2015 issue of the Journal of Applied Ecology. The team’s research was supported by the Utah Division of Wildlife Resources.

“As we started the study, we first met with ranchers to measure their perceptions of wildlife-livestock conflict in the Henry Mountains,” Ranglack says. “Most felt bison were consuming more than their share.”

The Henry Mountains bison are descendants of animals transplanted to the area from Yellowstone National Park in 1941 and thought to be one of the few genetically pure groups of the species. Challenges for the UDWR, which manages the bison, are determining how many of the animals live in the area in a given year, where they prefer to forage, the impact they have on available cattle forage and how many should be harvested during the hunting season.

Also sharing the range are coyotes, about which the USU team also questioned ranchers. Most respondents supported continued efforts to curb coyote populations.

Ranglack and colleagues constructed 40 grazing exclosures in the conflict area to observe foraging behavior. Cattle consumed about 52 percent of the total grass biomass on the shared range, while bison ate about 13 percent. Lagomorphs — that is, jackrabbits and cottontail rabbits ? gobbled up about 34 percent of the food.

“Because they’re nocturnal and small, lagomorphs are less noticeable on the landscape,” Ranglack says. “Unless you look closely ? as we walked around shared grazing areas, we found rabbit pellets everywhere.”

Looking at the big picture, the rabbits’ proliferation comes into focus.

“With a reduced coyote population, lagomorph populations are likely higher than what we would expect naturally,” Ranglack says. “Lagomorphs’ nutritional needs also affect their choice and consumption of forage.”

Pound for pound, rabbits eat much more than bison and the big-eared mammals need food of higher quality because they metabolize it quickly, he says.

“In contrast, bison can live on food of much lower nutritional quality because they digest their food so slowly,” Ranglack says. “It takes up to 80 hours for grass to pass through a bison’s digestive system, which gives plenty of time for nutrients to be absorbed.”

The next step for study, he says, is the impact of a controlled coyote population on lagomorph densities. To accomplish this, the team will continue to monitor exclosure sites.

“With appropriate ecological monitoring and adaptive adjustments, we believe livestock and wildlife can co-exist and perhaps even benefit each other,” Ranglack says. “For bison to be restored at ecologically meaningful scales in North America, they’ll likely have to share rangelands with cattle. We think this balance can be achieved.” 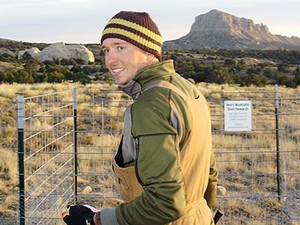 In Utah's Henry Mountains, USU ecologist Dustin Ranglack stands near an exclosure used to study foraging behavior of bison and other herbivores. He’s lead author of a study published in 'Journal of Applied Ecology.’ Photo by Melissa Ranglack. 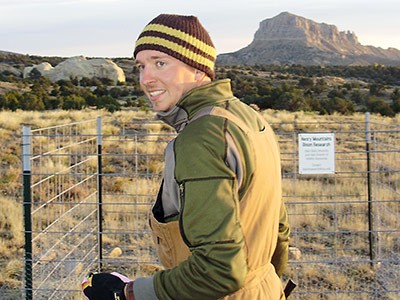