The designation “Blood Scholars” may sound a bit odd, but not to Utah State University physicists. They know the title refers to recipients of an endowed scholarship program established by physics alum Howard L. Blood ’47.
To be selected as a Blood Scholar is a distinct achievement not only because of required academic merit, but because the scholarship honors the memory of a scientist who served academia, industry and his country with innovation and dedicated enthusiasm.
Blood, a World War II veteran who passed away in 2006, established the scholarship endowment to aid both undergraduate and graduate students studying physics, a discipline he pursued with vigor for more than half a century.
Undergraduate physicists Scott Jensen, Linsey Johnson and Charlie Sim, along with graduate student Jeff Hazboun, are recipients of 2010 Blood scholarships. Each presented a report on his or her summer research at a Sept. 7 colloquium for Physics Department students, faculty and staff.
Jensen, who is conducting research with faculty mentor Tim Doyle, is investigating nanoparticles used to target and kill cancer cells.
“Thermal ablation therapy is becoming more common in the treatment of certain cancers,” Jensen says. “We’re focusing on the heating effects of nanoparticles, including study of their mechanical motion and electrical resistivity.”
During the summer, Johnson, along with faculty mentor Shane Larson, conducted a high altitude atmospheric profiling experiment with the High Altitude Reconnaissance Balloon for Outreach and Research group — known as ‘HARBOR’ — based at Weber State University. HARBOR weather balloons, which have been launched in regular missions since 2008, carry a variety of scientific sensors and payload experiments.
“My job was to measure variables of the atmosphere, including temperature, pressure and air density,” Johnson says. “We sent balloons 100,000 feet in the air and found there was a lot of turbulence and mixing of air between the tropospheric and stratospheric layers of the atmosphere. That mixing revealed that the atmosphere at higher altitudes was colder than the standard atmospheric model predicted.”
Undergrad Charlie Sim is working with USU’s Materials Physics Group to find ways to prevent electrostatic discharge from materials used in space.
“Static charging is a problem with spacecraft and other instruments that can lead to damage and dangerous conditions for astronauts,” says Sim, who is pursuing research with faculty mentor J.R. Dennison.
Hazboun is debating heady questions about the universe with faculty mentor James Wheeler. His Blood scholarship enabled him to attend a two-week graduate conference in Morelia, Mexico, focused on his research topic, which includes an attempt to express gravity in terms of quantum theory.
Why quantize gravity?
“Because all other fundamental interactions are quantized,” he says.
Hazboun notes that the Einstein Field Equation has matter in it and many unexplained gravitational phenomena exist, including dark energy and dark matter.
“We’re attempting to understand gravity from a practical physics perspective,” he says.
Related links:
Contact: Karalee Ransom, 435-797-4021, karalee.ransom@usu.edu
Writer: Mary-Ann Muffoletto, 435-797-3517, maryann.muffoletto@usu.edu 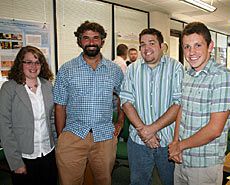 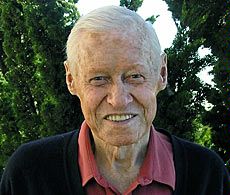 After graduating from USU in 1947, Blood earned a doctorate from the University of Washington and taught at that institution for 20 years. He later joined industry and designed floating platforms for airports, military bases and oil exploration.