Utah State University President Stan Albrecht recently approved a Climate Action Plan that outlines steps aimed at minimizing USU’s greenhouse gas emissions. The plan is part of the American College and University Presidents’ Climate Commitment that Albrecht signed in 2007. He was the first in the state to sign the pledge.
USU bills itself as a leading eco-friendly institution. It offers the only academic programs in conservation and restoration ecology, recreation resource management and watershed and Earth systems in the state.
Faculty members are also recognized for their sustainability expertise. Environment and Society professor Joseph Tainter has been sought out for expertise in various documentaries, including ABC’s Earth 2100 and Leonardo DiCaprio’s The Eleventh Hour. Researchers in the Jon M. Huntsman School of Business played a major role in bringing the first commercial wind farm to the state in 2008 and several programs in the humanities, including speech communication, English and history also have strong environmental emphases.
“As Utah’s land-grant university, USU has always had a major role in providing the sound science that is the basis for wise policies to manage the state’s land, water and living resources,” said Nat Frazer, dean of the College of Natural Resources and chair of USU’s Sustainability Council. “Now, more than ever, it is important for all Utahns to know how to use these precious resources in ways that ensure our economy, our quality of life and our society are sustainable.”
Throughout the years, USU has aimed to practice what it teaches:
The Climate Action Plan aims to reduce the university’s carbon footprint even more. The plan outlines specific steps to reach a goal of climate neutrality. Some of these goals are listed below.
Contact: Jordy Guth, 435-797-0947, jordy.guth@usu.edu
Writer: Annalisa Purser, 435-797-1429, annalisa.purser@usu.edu 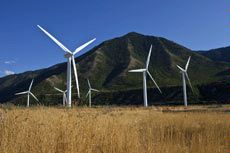