Google produces more than 33 million results for the word “sustainability” — a word that seems to be popping up everywhere these days.So what’s all the hype about?

Sustainability means meeting the needs of the present without compromising the ability of future generations to meet their own needs. At a time when the world consumes more quickly than the earth can replenish, it is important to do everything possible to become more efficient.

Utah State University formed its Sustainability Council in spring 2007 after President Stan Albrecht was the first in Utah to sign the American College & University Presidents Climate Commitment, a document that holds the university responsible for developing a plan to work toward climate neutrality.

While this document emphasizes the university’s move toward sustainability, Utah State has been instituting green practices around campus for more than 15 years and continues to implement new practices and utilize new technology to further this cause.

Since its beginning, the Facilities division at USU has had at least one engineer dedicated to issues impacting energy consumption. Today there is a sustainability coordinator who is supported by a staff of engineers working on projects to make USU more sustainable. Major projects include the chilled water plant, the co-generation/central heating unit and the transition to more efficient lighting.

“Sustainability is ingrained in our organization, it’s something we continually do,” said Ben Berrett, director of facilities operations. “Aside from the social responsibility aspect, saving energy saves money, and we strive to give taxpayers the highest value for their dollar.”

The chilled water plant, also known as the central cooling plant, was installed in 2003. For this project, facilities staff removed 25 old chillers from individual buildings around campus and replaced them with the most efficient electric chillers available. All the chillers were relocated to a central building where they are under 24-hour efficiency surveillance. The cool air generated from the coolers is pumped to buildings around campus through existing underground tunnels.

The co-generation/central heating unit is a gas turbine generator that burns natural gas and turns an electric generator that can generate about half of the electricity used on campus. The waste heat from this process goes through a heat exchanger to make steam used to heat the buildings around campus.

While the facilities staff has been changing light bulbs all over campus to replace existing ones with more efficient T8 bulbs, it has also been updating some rooms on campus with occupancy sensors that automatically shut off the lights when there’s no one in the room. The same concept saves on heating and cooling bills by using electronic sensors to automatically shut off some systems during the night.

In 1999 USU got its first set of Aggie Shuttles that run on natural gas. Natural gas is an excellent alternative because it only costs 65 to 70 cents per gallon and hardly emits any carbon dioxide, said Alden Erickson, shuttle supervisor. It can be difficult to maintain a fleet of natural gas vehicles because it requires increased mechanical maintenance and better-trained technicians. It can also be difficult to find a natural gas fueling station.

USU overcame both setbacks with its stellar maintenance crew and a grant that made possible the installation of two natural gas fueling stations on campus. Because of this, 90 percent of the Aggie Shuttles now run on natural gas and have become the only alternative-fuel bus system in higher education in Utah.

Besides using eco-friendly fuel, Aggie Shuttles transport up to 6,500 people per day during the school year, totaling 850,000-950,000 people per year. It does all this with just $11 per semester in student fees, which are offset with a charter service and revenue from ad space it provides to local vendors that generate approximately $25,000 each year.

In 1993 the landscaping crew at USU began working on ways to use water more efficiently around campus. Pressure regulators were installed on irrigation valves to reduce the droplet size of the water coming out of sprinklers. This allowed more water to hit the ground instead of getting carried off by the wind.

More sprinkler water at USU is lost to wind than to evaporation, according to Jim Huppi, USU landscape architect/manager.

Five years later, a computerized central control system for irrigation was installed that allows the landscape crew to shut down the entire system in just five minutes to save water during a rain storm as well as save power for pumps and shorten watering windows. Huppi said that before this upgrade took place, it would take about a day and a half to shut off the approximately 140 clocks around campus and the same amount of time to turn them back on.

The landscaping staff has also worked to organized plants around campus by their water requirements so the central control system can be programmed to water only what needs to be watered. The staff also began planting native plants and dedicated some spots around campus as demonstration gardens that have been planned and built by horticulture students.

“Since these changes were made, USU uses half as much water as it did in 1993, even though the landscape area has increased,” Huppi said. 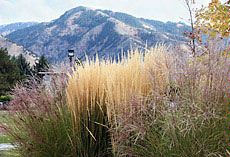 The area in front of the Merrill-Cazier Library features native grasses. 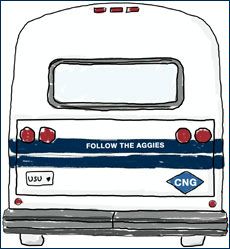 Ninety percent of USU's Aggie Shuttles run on natural gas, and the fleet is the only alternative-fuel bus system in higher education.