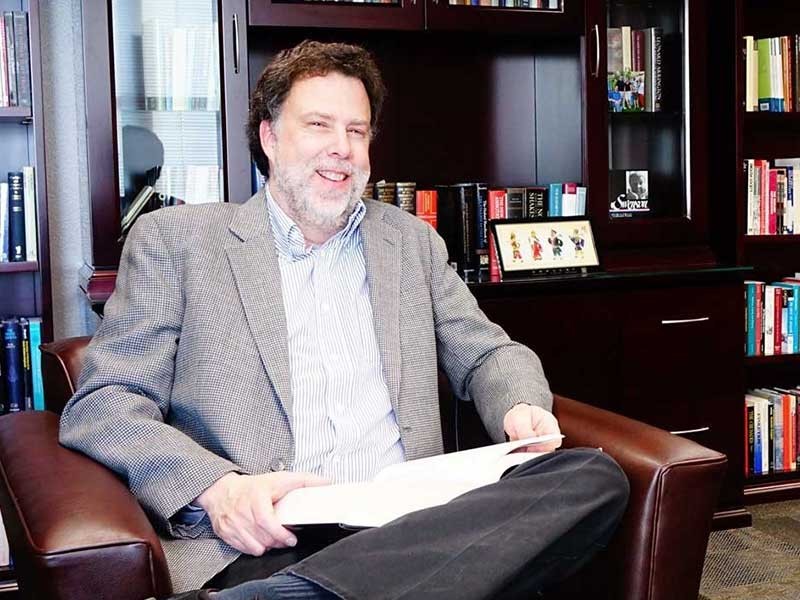 Joseph P. Ward, dean of the College of Humanities and Social Sciences, is the editor of A new book of scholarly essays, "European Empires in the American South: Colonial and Environmental Encounters."

A new book of scholarly essays, European Empires in the American South, is actually a tale of three might-have-beens.

In the 16th and 17th centuries — parallel with the more famous colonization taking place northward in New England — France, Great Britain and Spain looked at what’s now the American South and saw before them a banquet spread of meaty opportunities, goblets of goods and sweet power and wealth for dessert. And they imagined they could eat it all.

The meddling and misdeeds of these imperialist profiteers transformed the southern region of North American and its history in unfathomable ways, says the volume’s editor Joseph Ward, dean of the College of Humanities and Social Sciences. In the end, all three empires failed to remake the land “in their own image.” The South we know now, he says, is “built upon the wreckage of imperial collapse.”

Actors and headlines change, but history offers one constant thread: human nature. To use a phrase that itself originated in the 16th century, their eyes were bigger than their bellies.

The Europeans drawn to the South’s unexploited, fertile land foolishly believed “they had the skill and ability to remake the distant lands in their own image,” Ward said, let alone stockpile piles of money.

European Empires in the American South (University Press of Mississippi) contributes to an expanding and maturing scholarly body of work on what is now known as the Atlantic World, said Ward. The phrase encompasses the cat’s cradle of conquest, settlement, slavery and commerce among the continents that border the Atlantic Ocean — Africa, Western Europe and North and South America — from the day of Christopher Columbus to the French Revolution.

The book, subtitled “Colonial and Environmental Encounters,” brings together scholars from across the country who specialize in each of the three large European powers who competed for dominance in the South. Topics center on the efforts by Europeans to manage the residents — including, among others, warring tribes, enslaved Africans and the occasional pirate — as well as the complex environment.

Altogether, said Ward, the essays “bring to light new evidence of the ways in which the modern South — like so many other parts of the post-colonial world — is built upon the wreckage of imperial collapse.”

Ward’s work as editor began when he was professor of history at the University of Mississippi. “I developed a curiosity, especially about European interactions with the native Americans of the Southeast,” he said. “I had certain preconceptions, but I learned to appreciate its complexity.”

“As long ago as the 17th century,” he adds, “the Southeast was a place where you had several different European empires; you had native Americans who were in a variety of political tribal organizations; and you had increasingly the presence of African slaves. It was a multicultural, highly diverse, multiracial place.”

The image of the American South still prevalent in the media and political culture is one of cultural isolation, even homogeneity.  But as Ward explains, “The notion that only certain people, certain attitudes and certain behaviors are properly Southern is … quaint and unfounded.”

He adds, “Part of what we hope readers of this volume will appreciate is the extent to which, even in the South’s less urbanized parts, there’s a long legacy of multicultural and multiracial interactions.”