The sun gives off enough light to equal 4 trillion 100-watt light bulbs and converts nearly 5,000,000 tons of matter into energy each second. All of this energy is produced in the plasma core of the sun through nuclear fusion.
We see the evidence of nuclear fusion energy in the world around us — warm sunshine streaming in the window, fields of crops growing in the sunlight, sunburns.
“Essentially, fusion is the source of energy in your breakfast cereal,” said Farrell Edwards, Utah State University physics researcher. “Plants use light and energy from the sun to grow, and we use plants to eat. Thus, we consume the products of nuclear fusion each day.”
The results of fusion energy are all around us; however, the byproducts of fusion are not only energy, but neutrons as well. But how is the fuel, such as hydrogen in the sun, held together at the extremely high temperature required for fusion? The sun does it through gravity. Scientists on earth are trying to do it using magnetic fields.
Edwards and his colleagues are investigating a new way to use magnetic fields to confine plasma long enough to use its energy and neutrons. Plasmas are created when enough heat is applied to gas to cause its atoms to lose their electrons. The remaining ionized gas is called plasma. When enough heat is applied in this process, nuclear fusion occurs.
“The trick is to hold the stuff together at one hundred million degrees,” said Edwards.
Thus, the goal is to reach a new stable state of plasma equilibrium that will hold together long enough for it to be used. Once this state is reached, Edwards will be able to demonstrate that he can indeed bottle the sun’s energy — for a second, at least.
To complete this experiment, Edwards is using a tokamak, which is a toroidal, or donut-shaped device that produces a magnetic field to confine plasma. The tokamak that Edwards is using is on loan from the University of Saskatchewan, USU’s partner in this research. The tokamak that he is using is called STOR-1M for “Saskatchewan Torus, model 1, Modified.”
Collaborating with Edwards are Ajay Singh, experimentalist and director of the laboratory, and Eric Held, a theorist. The team is working to heat a gas inside the tokamak to 100 million degrees Celsius in order to sustain fusion for a fair fraction of a second. Sandia National Laboratory in New Mexico is conducting similar research and has already achieved heating plasma to 5 billion degrees and holding it together for 10^-8 seconds or .00000001 seconds — not long enough for most purposes.
There are many positive benefits that could come from this research when completed.
“If the new state is achieved, the consequences to plasma scientists would be huge and could even go commercial,” said Jan Sojka, USU physics department head.
The new plasma state could potentially explain a number of astronomical phenomena that Edwards has been studying and would bring his research full circle.
“The whole idea for this research started 20 years ago when I was studying Venus flux ropes, or magnetic loops in Venus’ ionosphere,” said Edwards. “This theory, if proven, would provide an explanation for this phenomenon.”
Results from this research would also explain phenomena such as planetary magnetotails, or plumes of the magnetic field around the earth, and coronal loops on the sun.
If successful, Edwards’ research could also pave the way for creating a neutron generator, which would produce a neutron flux much higher than any other generator currently on the market. Neutron generators are used in devices to examine luggage and detect potential airplane bombs, detect and treat cancer, and detect plastic land mines left over from war. Consequently, the Department of Homeland Security has great interest in devices such as this and earlier awarded USU a $350,000 contract to fund the research.
So far, Edwards and his colleagues have published their findings on the new plasma state in Physical Review Letters, one of the most prestigious physics journals.
“Our research is really beginning to pick up steam,” said Edwards. “It is becoming recognized in the scientific community, and the possibilities for the future are exciting.”
Although Edwards’ theory about plasma equilibrium has not yet been proven, he feels that they are very close, expecting definite results within one or two years. He tells those who want to know the status of the research to “stay tuned.”
“I have been working in the physics department at Utah State University for over 40 years, and I don’t see any reason to stop now,” said Edwards. “I am having too much fun messing around with my research, and in the end, it is just a delight to be alive.”
For more information visit the department’s Web site.
Contact: Farrell Edwards, 435-797-2855, farrell@cc.usu.edu
Writer: Kinsey Love, kinsey.love@usu.edu 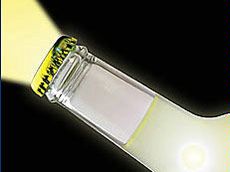 If successful, bottling the sun's energy could pave the way for creating a neutron generator.