Across Lake Tanganyika from Tanzania’s Gombe School of Environment and Society, violence rages between government troops and rebels in the Democratic Republic of Congo. Utah State University graduate student Yared Fubusa, founder of the school, acknowledges the sobering scenario – all too common in his native continent and a key basis for his life’s passion.

“People who love the environment tend to be peacemakers,” he says. “It’s harder to take your gun and kill someone if you live in a community that fosters environmental stewardship, economic vitality and human dignity.”

A doctoral candidate in USU’s Department of Environment and Society, Fubusa was named a lifelong fellow in fall 2008 in the Arlington, Va.-based Ashoka organization, which identifies itself as the world’s largest community of leading social entrepreneurs. As an Ashoka Fellow, Fubusa receives a three-year fellowship to support his efforts as director and chief fundraiser of an innovative school that seeks balance and prosperity between humans and wildlife.

Not long after beginning his studies at Utah State in 2004, Fubusa launched his school – GOSESO – in western Tanzania’s Kigoma region with partners USU and the Teton Science Schools. Located on the eastern shore of Lake Tanganyika and Gombe Stream National Park, the school is close to the rural village where Fubusa was born and raised. The national park is home to the chimpanzee population made famous by world-renowned primatologist Jane Goodall.

As a youth, Fubusa served as Goodall’s research assistant and subsequently became a founding member and spokesperson for her global Roots and Shoots program in western and central Tanzania. The experience, along with his childhood witness of the slaughter of crop-raiding primates, fueled his interest in wildlife protection.

“I was no more than five years old when my village hired a group of hunters to kill the ‘enemy’ animals,” he says. “Many of my friends were jubilant to see dead wild animals, but I never felt that way.”

In time, Fubusa’s vision grew to a view of community-based conversation that not only focused on wildlife but included a holistic framework designed to foster sustainability for humans as well. “The survival of wildlife depends on the stability of the people who surround them,” he says.

His father’s death in early 2004 further ignited his determination to create a lasting vehicle of change.

“I was teaching at the University of Virginia when my father passed away,” says Fubusa, who earned an economics degree from Longwood University in 2000 and a master’s degree in parks management and eco-tourism from the University of Utah in 2003.

His father’s lockbox, which surviving relatives assumed held money, contained three photos of his son.
“I realized that my father’s legacy was me,” Fubusa says. “Everything he had, he invested in me so I could get an education. That made me take a second look at my life and I knew then that, through me, my father’s life could benefit thousands of people.”

With an idea of creating a special school in his homeland, Fubusa began researching graduate programs on the Web that could help him pursue his fledgling dream.

“The words ‘USU Department of Environment and Society’ appeared on my screen,” he says. “‘That’s the theme of my research,’” I thought. That night I couldn’t sleep. I knew this was the place. At eight the next morning I called. Because of my accent the conversation was stiff. But once I showed up in person, the admissions process went faster than usual. I told the professors, ‘If you reject me, I will keep asking until you accept me.’”

From Fubusa’s first visit to Utah State, professor Terry Sharik, then head of USU’s Department of Environment and Society, immediately recognized the new Aggie’s unyielding commitment to his cause. Though Sharik played a key role in helping Fubusa form a network of partners to launch his efforts, the professor takes no credit for the student’s phenomenal fundraising and organizational abilities.

“What Yared is doing is transformational,” Sharik says. “We helped him make connections, but he did all the footwork. I’ve never known a Ph.D. student who has been so successful in fundraising.”

In less than four years, he notes, Fubusa has established a school with 45 employees that will soon accommodate up to 200 youths, as well as scores of learners in 32 neighboring villages.

The school’s unique format supports a “school within walls” that provides instruction to secondary school students and is scheduled to open residential facilities in 2009. GOSESO’s “school without walls” provides educational outreach to local residents of all ages.

In addition, the school hosts a study abroad program to allow students from other countries to share in the experience. In 2007, Aggie Drew Braithwaite spent several months in Tanzania volunteering at the school.

“My first visit to Yared’s school was a life-altering experience,” says Braithwaite, who graduated from USU in spring 2008 as the College of Natural Resources valedictorian and will soon join GOSESO as an employee.

For now, Fubusa’s responsibilities afford him little time to enjoy GOSESO’s idyllic campus, which offers lakeside views of lush miombo woodlands and mountains. Along with completing his research in rural economies, sustainable livelihoods and community-based conservation with faculty advisor Layne Coppock, Fubusa maintains a busy speaking schedule throughout the United States and abroad with current and potential donors.

“My current lifestyle doesn’t allow much time for a personal life,” he says. “But I’m institutionalizing my vision and pursuing my dream – a lasting dream that builds on my father’s legacy.”
Related Links:
Gombe School of Environment and Society (GOSESO)
USU Department of Environment and Society
USU College of Natural Resources
Contacts: Yared Fubusa; Terry Shark, 435-797-3819
Writer: Mary-Ann Muffoletto, 435-797-3517 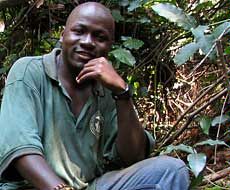 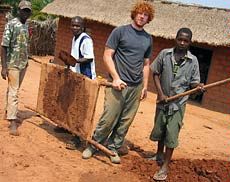 Aggie Drew Braithwaite, second from right, learns brickmaking with the school's students. Braithwaite, who was the College of Natural Resources’ spring 2008 valedictorian, is joining the school’s staff.