‘Have chemistry set, will travel’ was Utah State University student Jason Reed’s motto as he spent most of summer 2010 rafting, hiking and camping around five major rivers of the Intermountain West.

“River research is fascinating,” says Reed, who is among Aggies presenting research Jan. 26, at the 10th Anniversary Celebration of Undergraduate Research Day on Capitol Hill in Salt Lake City. “But seeing impaired waterways is sobering. After all, water is absolutely essential to our survival.”

“We were in the field working by about 7 a.m. each day,” says Reed, a fisheries and aquatic sciences major whose project was funded by a National Science Foundation Experiences for Undergraduate grant. “A sampling session might last until six in the evening.”

Reed was measuring biochemical oxygen demand, known as “BOD,” in the various rivers.

“BOD is an important water quality parameter that describes the amount of oxygen used in biological and chemical reactions,” he says. “High levels of BOD can indicate impaired water.”

What causes this condition?

“Mostly human inputs,” Reed says. “Over the past 50 years or so, human activities, especially agriculture, have added a significant amount of biologically available nutrients such as nitrate, phosphate and ammonium to the rivers of the West.”

As more organic matter and nutrients from sources such as fertilizers, livestock manure and runoff from human-developed areas, enter streams and rivers, BOD rises. A process called eutrophication ensues, where nutrients stimulate excessive algal growth, which eventually sinks in the body of water and is consumed by bacteria.

“Microorganisms consume oxygen as they feed on organic matter,” he says. “The more oxygen microorganisms use, the less is left for other aquatic life, including insects and fish.”

Eutrophication in water systems is a worldwide problem, Reed says, but not much is known about how rivers transport and retain nutrients.

“We applying tools to measure this process in large rivers that have been used in smaller streams,” he says.

Reed, who was employed as a sommelier in high-end restaurants along the Colorado River-dependent Las Vegas strip before entering USU, says that, as critical as water is to human survival, surprisingly little is known about this resource.

“We’re so dependent on clean water, yet we understand so little about it,” he says. “We treat it like an infinite resource, but it may not be.” 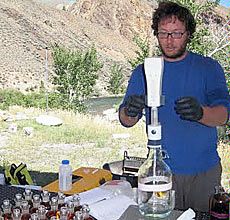 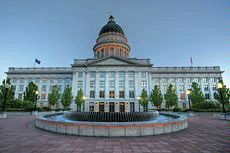 Reed is among a select group of USU undergraduates presenting at the 10th Anniversary Celebration of Undergraduate Research Day on Capitol Hill Jan. 26, in Salt Lake City.