Beloved as a folk symbol in Puerto Rico, the diminutive coqui frog, introduced to Hawaii in the late 1980s, is not nearly so welcome in its newfound home. Named for its loud “ko kee” mating call, the tiny amphibian, probably a stowaway of the horticulture trade, spread rapidly through the Hawaiian Islands, where many consider it an invasive pest.

Opinions aside, the coqui offers ecologists an opportunity to study what happens to adaptive traits when a species expands its range into novel environments. Utah State University alum Eric O’Neill and USU faculty member Karen Beard, along with former Utah State faculty member Mike Pfrender, now at the University of Notre Dame, explored this question and published their findings in the June 20, 2012, online edition of Biology Letters. Their research was funded by the USU-based Berryman Institute for Wildlife Damage Management, USDA-APHIS Wildlife Services and the National Science Foundation.

“We studied frog populations in Puerto Rico and in Hawaii,” says O’Neill, who completed a doctorate in biology from Utah State in 2009. “Specifically, we examined the influences of genetic drift and natural selection on a color pattern polymorphism in native and introduced populations.”

Genetic drift is a change in the frequency of a gene variant in a population due to random sampling.

“We wanted to determine whether evolutionary dynamics of adaptive traits — such as color pattern — remain dominated by selection or if genetic drift becomes the prevailing force contributing to trait shifts,” says Beard, associate professor in USU’s Ecology Center and Department of Wildland Resources.

Typically brown with yellow stripes, coqui blend seamlessly into their environment — the perfect foil for protection from hungry predators.

“These frogs are very cryptic and blend in with the leaf litter so well, they’re nearly invisible,” says O’Neill, now a postdoctoral researcher at the University of Kentucky. “One might expect their color patterns would change to adapt to different predators and environmental influences.”

This loss of selection and an increase in genetic drift in these traits, he says, is likely to have evolutionary consequences for this species in Hawaii.

“We have to ask ‘What’s the fate of these formerly adaptive traits in the Hawaiian frog populations?’” O’Neill says. “Will they remain under selection or will random genetic drift dominate their evolution? In this case, the answer appears to be drift.” 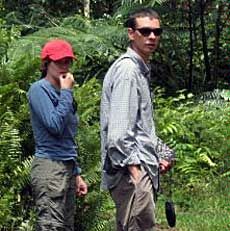 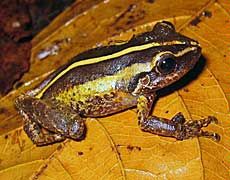 A native of Puerto Rico, the tiny coqui frog has been introduced to the Hawaiian islands, where it has spread rapidly and is considered by many an invasive pest. Photo by Laine Giovanetto.