Professor Edward M. Heath of the Health, Physical Education and Recreation Department spoke Wednesday, April 5, at the President’s home. Heath’s presentation was part of the inaugural professor lecture series.
Heath covered two projects he worked on during his career. The first was a project that studied athletic amenorrhea in female athletes. Amenorrhea is a halting of the menstrual cycle due to lack of energy balance rather than intense physical activity or low body fat as previously thought. Heath said there have been some studies that show female athletes are 10 times more likely to acquire amenorrhea than sedentary women.
“Amenorrhea is responsible for infertility and loss of bone mass,” said Heath. “This can cause big problems later in life.”
The second project was a school health promotion project based in El Paso, Texas, geared toward elementary age children called Coordinated Approach To Child Health (CATCH).
The project, funded by the American Heart Association, was aimed at decreasing obesity and increasing fitness levels of children in El Paso elementary schools. Heath and his team helped implement programs that taught children healthy eating and exercise habits.
“There is very good evidence to suggest that these healthy behaviors track into adulthood,” said Heath.
After three years, the results of the CATCH schools were compared to control schools. The study showed significant results. CATCH significantly decreased the risk of overweight students and slowed the increase in body fat percentage among third, fourth and fifth graders. There was also a larger increase in the activity during physical education classes and a drop in fat content of the foods served in the school cafeteria.
“After we did this evaluation we were big promoters of the program,” said Heath.
There are currently 108 elementary schools in the El Paso area that have implemented CATCH since 1997. Heath said there are no similar programs in Utah elementary schools, due to lack of funding.
“Eventually, I’d like to impact that,” said Heath. 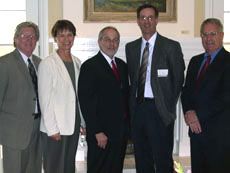 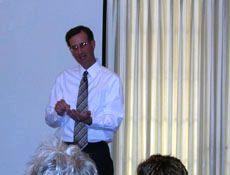 Professor Health discussed the CATCH project during his presentation. 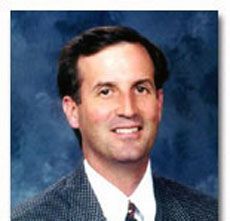