Imagine boarding a plane for a two-week vacation and touching down to find your destination in flames, protesters charging policemen and youth patrolling the city, machetes in hand. Porter Illi, a senior at Utah State University, found just that when he arrived in Cairo, Egypt in late January 2011.

He landed one day after political demonstrations turned violent, when civilians protesting President Hasni Mubarak’s 30-year reign were attacked by his supporters.

“What I have seen and experienced today has been absolutely frightening,” he wrote in his journal Jan. 29. “The protests of yesterday were far more devastating than what I had seen on the news in Morocco. What were initially storms of people taking to the streets, quickly escalated to a violent force, targeting policemen and government buildings.”

Since August, Illi, a political science and international studies major, has studied Arabic in Morocco on a prestigious yearlong Boren Scholarship. He purchased his ticket to Egypt in early January as part of a two-week break from the language institute where he studies in Morocco.

“In Morocco, we had been getting a lot of coverage of Tunisia on al-Jeezera TV,” he said during a recent interview over Skype with contacts in USU’s College of Humanities and Social Sciences. “It wasn’t dangerous in Egypt until Friday [when I was in the air.]”

In early January, Tunisians took to the streets in protest of rising food costs, lack of political freedoms, and exorbitant levels of government corruption. Their efforts resulted in the ousting of President Zine El Abidine Ben Ali, who had governed under authoritarian rule since 1987. The Tunisian uprising has inspired similar protests throughout the Arab World, most visibly in Egypt, Yemen, Algeria and Jordan.

From the airport, Illi boarded a bus to his hostel in Cairo. As he neared the city, evidence of the riots lay scattered along the roadside.

“There were burnt cars everywhere,” he said. “Police stations were burnt, a court house was still burning, its papers blowing in the air. It was really intimidating.”

Illi’s stop was Tahrir Square, where the majority of demonstrations were taking place. By 7 a.m., people were already congregating to protest, he said.

Illi paid a young man to show him to his hostel, and as they walked through the square they passed a 20-story building still in flames. When he arrived at the hostel, the few remaining travelers were trying to flee Cairo. They shared the events of the previous day when police began beating protesters calling for a regime change.

“It was clear I had to leave,” Illi said.

But the Internet was out, phone lines were down, the trains had stopped running. From the balcony of the hostel, Illi witnessed a brutal clash between the police and protesters.

“The police would drag people down the streets and beat them with clubs, he said. “They were throwing tear gas; we had to put scarves over our faces.”

Illi joined two other student travelers, and together they tried to find a train station to exit the city.

“Crossing the main road proved difficult as tanks drove by and groups of people would randomly charge them. … We eventually found a narrow road that led up to the station,” he wrote in his journal. “The small stores that lined the road were hit hard by mobs — the entire stretch of road was paved with broken soda bottles.”

Unconfirmed reports from CNN estimate that up to 300 people may have been killed and scores more injured during the demonstrations. But Illi witnessed more than just violence in Cairo.

Most protesters were peaceful — even the youth who had taken to the streets with machetes.

Illi spoke with the Egyptians he encountered; he wanted to learn their stories.

After midnight, he boarded a train out of Cairo. In his last Skype conversation with USU, Illi was in Turkey with plans to return to Morocco soon.

Abdulkafi Albirini, assistant professor of Arabic at USU’s College of Humanities and Social Sciences, is closely monitoring the events abroad.

“This is something we are all talking about,” Albirini said. “People in the Arab World think of the Middle East as one entity. They think of the Egyptians as their countrymen.”

Originally from Syria, Albirini has heard conflicting messages about the Egyptian uprising from relatives in the Middle East.

Because most Arab countries operate under a police state, it is very difficult for people to affect change. They often operate under emergency law, meaning you can be taken to prison without explanation, Albirini said.

He was surprised by the uprising in Tunisia, and never anticipated the events in Egypt to follow.

“The Tunisian case was thought of as an exception,” he said.

But in the days afterward, protests erupted throughout the Middle East. Egyptians struggling with similar economic and corruption issues became motivated when they saw that the people of Tunisia were supported, he said.

Coverage of the unrest has been blocked or downplayed in the Middle East. In Syria, the government is not allowing people to watch the protests, Albirini said.

“They are trying to hide what is going on.”

He has begun a study analyzing Egyptian newspapers to investigate the discourse used to describe the protests. He wants to understand the rhetoric used by both sides.

“I am studying how reality is presented differently by two camps,” Albirini said.

In the weeks since demonstrations began, President Barack Obama has urged Mubarak to step down, backing an orderly exchange of power to a more democratic system. But the fall of Mubarak’s regime may not result in additional freedoms for the Egyptian people.

“As Americans, when we get jubilant at the turning out of a dictator, we are looking at it from our own success as a democracy,” said Jeannie Johnson, an expert of international relations at USU and former CIA intelligence officer.

However, in uprisings like Egypt’s, moderates are rarely organized enough to take power — even if they are the majority in society. The political infrastructure is typically not in place for parties to emerge in time for elections, she said.

“Moderates end up being the softest voice in politics,” Johnson said. “If you look back at history, organization trumps numbers every time. Politics is ruled by the organized. That is the worry.”

A concern among U.S. security officials is that the only groups organized enough to take power will be militant Islamic extremists.

“There are forces at work in any society, in particular in one that is facing these kinds of challenges, who will try to derail or overtake the process to pursue their own specific agenda,” Clinton said.

Historically, Egypt has been a longstanding ally for the United States in the Arab World and has been one of the most stable counties in the Middle East. Egypt is one of the few Arab countries that has made concessions to Israel and where Americans have been able to travel with relative ease.

“All of those things are now at risk,” Johnson said.

Johnson is keeping close watch on the transition of power in Egypt. Should unrest continue to spread, stability in the Middle East could crumble. Then countries like Jordan that have a more positive relationship with the United States and the West could be threatened.

“I am looking at the riots in Egypt cautiously,” she said. “But I do have hope.” 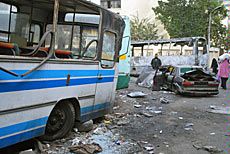 (All photos by USU student Porter Illi during his time in Cairo.) 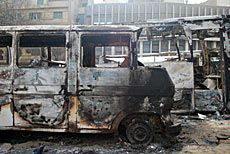 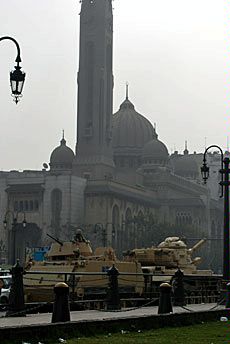 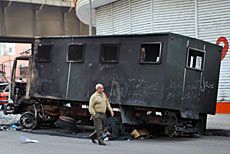 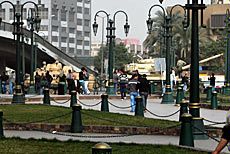