A group of graduate students in Utah State University’s Bioregional Planning Program garnered a professional, peer-reviewed honor this fall in recognition of its efforts in providing alternative solutions for a picturesque region of southeastern Utah sought after for conservation, recreation and energy development.

“This is excellent recognition for our students,” says Richard Toth, professor in USU’s Department of Environment and Society, who, along with teaching assistant Kyle Young, mentored the team on the project.

The USU team investigated an area of the Colorado Plateau framed by redrock canyons that encompasses Utah’s famed San Rafael Swell, a domed geologic formation. Surrounded by the Book Cliffs of Price Canyon to the north, the Utah towns of Green River to the west and Hanksville to the south, the region is a patchwork of wilderness — some of it protected; some of it not — held in custody of diverse owners and stakeholders.

The team’s specific focus was School and Institutional Trust Lands Administration and Bureau of Land Management lands which, when examined on a map, reveal a distinct checkerboard pattern of ownership. The pattern presents multiple challenges for the BLM and SITLA in management policies and land use.

The BLM is largely focused on conservation of the lands to meet federally mandated environmental impact requirements, she says, while SITLA is concerned with maximizing profit from the lands to support Utah’s public schools.

Using extensive geographic information systems data available from the state, the student team spent nearly a year preparing four alternative future plans and one composite plan to address the needs of the BLM and SITLA.

“Our composite plan looked at the overlay of each of these alternative scenarios and where we could consolidate lands to meet as many of the BLM and SITLA’s goals as possible,” she says. “What we discovered, when we mapped this out, is the ‘checkerboard’ disappeared.”

“The students presented their findings in separate meetings with BLM and SITLA officials and again in joint meetings,” Toth says. “The reception was very positive and demonstrated to the agencies that a rational and reasonable approach could be employed to consolidate lands to maximum benefits for multiple stakeholders.” 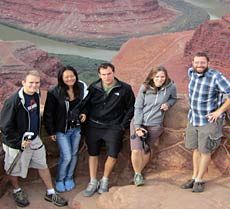 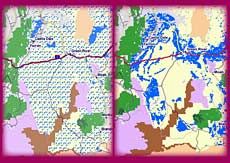