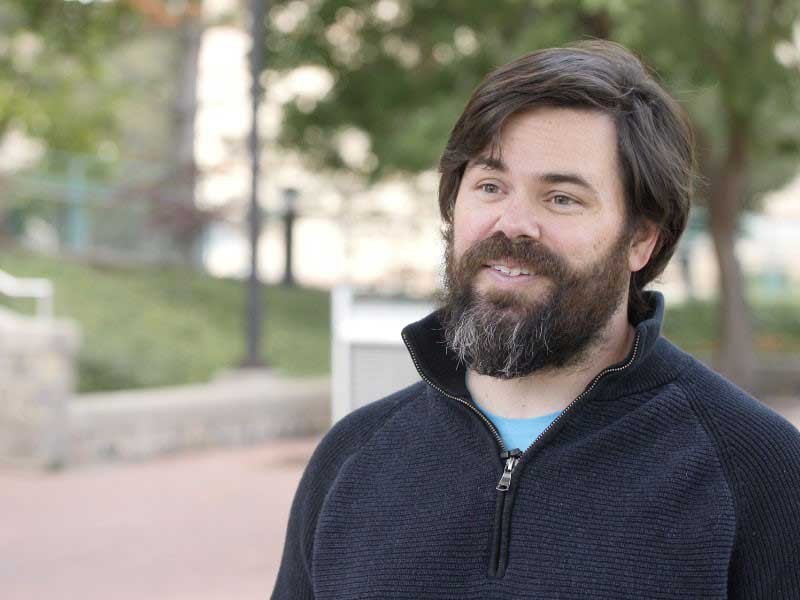 Greg Goelzhauser, an associate professor of Political Science and an expert on the U.S. judicial system, says the visit by the 10th Circuit Court of Appeals to hear oral arguments in four cases at Utah State University is extremely rare and "a unique opportunity for students to see the government in action."

The federal 10th Circuit Court of Appeals is visiting Utah State University next week to conduct business as usual.

But that simple fact contains so much news that is significant and extraordinary for the university itself.

For one thing, the 10th Circuit Court, which is secondary only to the U.S. Supreme Court in the hierarchy of the federal court system, rarely travels outside its home in Denver.

Even more unusual is a visit to an outside institution, especially a university like USU that doesn’t have a law school.

The three presiding judges will listen to oral arguments not in a courtroom, but on the stage of the Russell/Wanlass Performance Hall.

And, following the hearings, the three judges, who are appointed by the president of the United States and confirmed by the U.S. Senate,  will take questions from the audience

All in all, said Greg Goelzhauser, an associate professor of political science and an expert on the U.S. judicial system, this is “a rare and unique opportunity to see a high-level federal court in the midst of its decision-making process.”

On Tuesday, Oct. 22, the judges will hear oral arguments on four cases, divided into two sessions. The first session begins at 8:45 a.m., continuing for approximately 1.5 hours. The second session runs from 10:30 a.m. to about 11:30 a.m. A question-and-answer period will follow the second session, giving students the opportunity to interact with the judges.

There is no cost to attend, but the 800 or so admission tickets have been claimed. Standby tickets may be available immediately prior to each session. Alternatively, both sessions will be live-streamed in the Eccles Conference Center Auditorium. No tickets are required for the live streaming, and seats will be available on the first-come first-serve basis.

Although tickets are sold out, USU students may still be able to attend by participating in a research study conducted by Greg Goelzhauser and fellow Political Science professor Damon Cann. Participating students would receive a $10 Amazon gift card for attending a court-related activity and taking a survey about their experience. Half of the participants will be randomly assigned to attend one of the 10th Circuit's sessions. Participation is limited to the first 250 USU students who sign up in each session. For more information or to sign up, go to https://tinyurl.com/tenthcircuit.

Goelzhauser, who is the author of two books and multiple journal articles on the federal court system, describes three levels: district courts (where trials are held, “the sort of thing that people are used to seeing on TV in courtroom dramas,” said the professor); the circuit court of appeals and, finally, the U.S. Supreme Court.

Here at USU, the presiding judges include two judges from Utah, Scott M. Matheson and Carolyn B. McHugh, as well as Timothy M. Tymkovich, who is the court’s chief judge and based in Colorado.

Robert J. Shelby, a USU alumnus who holds the post of District Judge for Utah, made national news with his 2013 ruling that struck down Amendment 3 of the Utah State Constitution, which defined marriage as solely between a man and a woman. The decision, allowing same-sex marriage in Utah, was affirmed by the 10th Circuit Court the following year.

Because the U.S. Supreme Court only accepts about 70 cases a year, said Goelzhauser, “the vast majority of all of the country's appellate opinions are made by circuit courts and set final binding precedent for those circuits.”

While at USU, the judges will hear appeals in, for example, a lawsuit against a therapy ranch for troubled youth after a 17-year-old fell off a 70-foot-high rock during a hike, as well as a case involving a UPS worker who filed a race discrimination lawsuit and was subsequently disciplined by a human resources employee involved in the original lawsuit.

The Circuit Court, says Goelzhauser, “resolves conflicts for the parties, but in doing so, sets precedents for future actors.”

The security for the Circuit Court appearance will be strict. IDs must be provided, whether it’s a students’ ID or drivers’ license. In addition, no packages, backpacks or purses will be allowed, as well as any electronic device like cellphones, laptops or cameras. A coat check will be available.

For information on tickets and the cases to be heard, visit CHaSS.usu.edu/court.

All in all, said Greg Goelzhauser, an associate professor of political science and an expert on the U.S. judicial system, this is "a rare and unique opportunity to see a high-level federal court in the midst of its decision-making process."