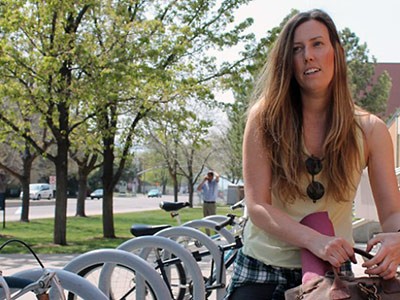 Class of ’15 Faces the Future

By Whitney Howard in The Utah Statesman Thursday, April 23, 2015

Many seniors at Utah State University are finally getting that expensive piece of paper they ordered approximately four years ago.

After seniors receive their diplomas, they will step into the job market arena. They will be thrown into the “real world,” where they may face debt and unemployment.

But what can seem intimidating is starting another chapter in life, not unlike being an incoming freshman, said Cooper Larsen, a senior majoring in international business and economics.

“You look around, and everyone is so old,” Larsen said. “I’m like a freshman in real life.”

Larsen has a job lined up after graduation. However, this achievement did not come without some serious effort. Larsen had 17 interviews before landing a job with Goldman Sachs in Salt Lake City.

Other seniors don’t have a job in their field awaiting them after graduation but have plans to apply later, like graphic design major Chelsea Babbit.

Babbit reflected on similar feelings of uncertainty at the beginning and end of a college career.

“I think it’s normal for people to feel out of their comfort zone,” Babbit said, “but now this is my comfort zone, and I’m leaving.”

Other seniors may decide to go a different route entirely. For example, Edye Baker is a psychology major who plans to attend dental hygiene school in the fall.

“Midway through my degree, I realized it was a lot of research,” Baker said. “I didn’t want to teach undergrad and do research when I knew I would hate it.”

Regardless of their plans, several seniors said they will miss the opportunity to meet people after graduation. Larsen did not initially expect to be impacted by the people he met during his time here.

“There are so many opportunities to get out and meet other students,” Larsen said. “Not that none of that exists in the future, but there are a lot less opportunities for that I think.”

Baker will also miss the diversity of people at USU, as well as the college environment.

“Everybody’s up late. Everybody’s doing crazy stuff all the time,” Baker added. “I’ll lose that chaotic, ‘We’re in college, and we do whatever we want,’ sort of environment.”

As for things seniors won’t miss, Larsen said he will enjoy the free time that comes with no longer being in college.

“I’ll work lots of hours in the office, but they’ll be in the office,” Larsen said. “When you’re away from work, you have the opportunity to be involved in what you’re passionate about.”

Babbit also said she looks forward to the openness in her life but also pointed out the intimidation that comes with it.

“My future has never been so open,” Babbit said. “It’s so freeing, but it’s also horribly terrifying.”

Graduation does not come without some anxiety. What-if fears tend to be very common among seniors, Baker said.

“My main fear is that I won’t like what I end up doing,” Baker said. “But you don’t have to do that for the rest of your life. You can change if you don’t end up liking things. You can do something else.”

Larsen recommended that students get involved early and often in clubs and associations that interest them at USU.

“I think there is a lot of growth that comes with getting involved that prepares you a lot more to graduate than if you just kind of float through and go to classes,” Larsen said.

Baker added that a balance between fun and academics is key.

“If you just do studying, it’ll drive you completely crazy,” Baker said. “There are a lot of opportunities you miss out on in the college experience if you just study.”

Babbit did not rule out the importance of learning while in college. Babbit said she worries about being able to remain open to learning after graduation. She encouraged remaining students to try to get the most out of each class while they’re still here.

“I feel like once you’ve developed an interest and openness to knowledge, any class can be interesting,” Babbit said. “My advice would be to immerse yourself in different things and be open to it, and try and learn something from every class.”