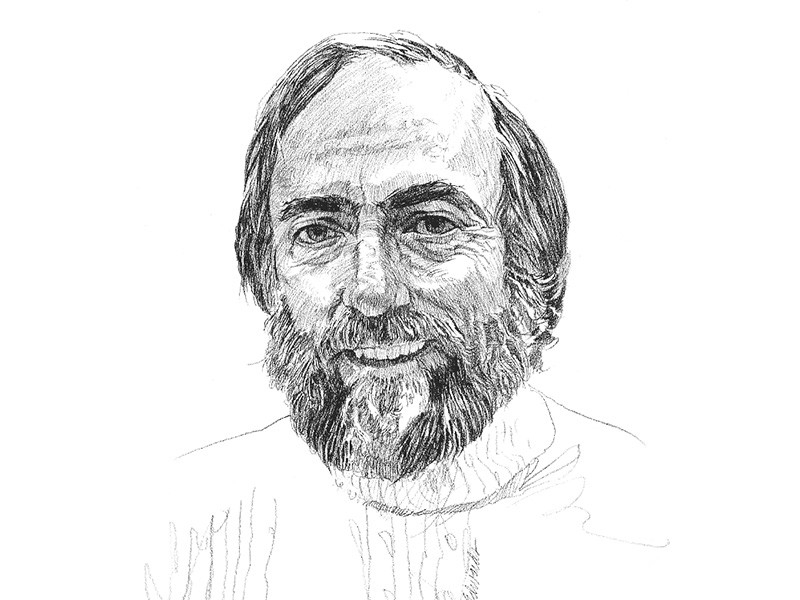 Logan native and California Institute of Technology faculty member Kip Thorne was awarded the Nobel Prize in physics in October 2017 for his work in detecting gravitational waves — ripples in space and time that travel throughout the universe — along with fellow physicists Rainer Weiss, a physics professor at MIT, and Barry Barish, a physics professors at Caltech.

The trio are key members of LIGO, or the Laser Interferometer Gravitational-Wave Observatory — a scientific collaboration that made history when it announced last year the first ever detection of gravitational waves.

LIGO boasts two specialized detectors in Washington and Louisiana, designed to pick up these ripples. Specifically, the observatories look for the gravitational waves stemming from violent mergers of super dense faraway objects, such as black holes or leftover stellar remnants known as neutron stars. When these bodies come together, they spin around each other rapidly, several times per second, before joining to make one incredibly dense object. It’s like a cosmic dance that creates gargantuan ripples in the fabric of space-time, which travel outward at the speed of light, and eventually reach Earth. By the time they reach Earth, the waves have greatly diminished, needing extremely sensitive instruments, like LIGO’s detectors, to pick them up.

Thorne received an honorary doctorate from Utah State University in 2000, and has many close ties to the institution, most importantly from his parents, the former D. Wynne, USU’s first ever vice president for research and former Alison Thorne, an economist and USU faculty member.

In 2014, Thorne served as the science advisor for the academy-award-winning film, Interstellar, about a team of explorers who travel through a wormhole in space in an attempt to ensure humanity’s survival. After the movie came out, USU alum and writer Patrick Williams wrote a story for Utah State Magazine’s spring 2015 issue featured in its entirety below.

From Logan to Galaxies Beyond

For most die-hard film fans, the name Kip Thorne isn’t that familiar, or at least not until recently. But, bring his name up to a scientist — especially a physicist — and well, watch out. They readily recognize Thorne as a science superstar. Personal friends? Count Stephen Hawking and Carl Sagan. Not bad for someone who grew up in Logan, Utah, and, as he told Los Angeles Times reporter Josh Rottenberg, a boy who wanted to grow up to be a snowplow driver.

But, growing up, Thorne also had the perspective of two parents who, to say the least, were invested in education, both at Utah State University. Kip’s father, D. Wynne Thorne, was a scientist himself, an agronomist, who in 1965 became the university’s first-ever vice president for research after heading the school’s Agricultural Experiment Station. Kip’s mother, Alison Comish Thorne, was an economist who was a faculty member at USU and was strongly involved in community activities, including service on the Board of Education for the Logan City School District. His parents, likely, had a bit of educational influence on Kip. And, as Thorne told Rottenberg, “my mother took me to a lecture about the solar system when I was 8 and I just got hooked.”

Still, it’s a long way from Logan, Utah, to the heavenly realm of Hollywood and the other kind of stars, but that’s where Thorne found himself after the release of the blockbuster film Interstellar. One of the benefits? Standing shoulder to shoulder with the likes of Matthew McConaughey, or among the glitter and glitz with Anne Hathaway or discussing the science of the film with its noted director Christopher Nolan.

In fact, Thorne did a bit more than “discuss science” with Nolan.  He was involved with the film project from its inception along with friend and colleague Lynda Obst. The pair, with Jonathan Nolan, coauthored the story from which the screenplay was developed. Thorne was listed as an executive producer and scientific consultant for the film, which has become a science fiction blockbuster. And, it’s thanks to Thorne that the film has a pretty solid scientific base. He worked closely with the effects team to ensure accuracy.

The film opened in November 2014 and Thorne attended some of those events, including the London premiere. In the Academy Awards race in our country, Interstellar captured five nominations — original score, sound editing, sound mixing, production design and visual effects, the category it won. In the 2015 Bafta Awards — the British equivalent of the Academy Awards, Interstellar took the top award in the special effects category.

Not that Thorne didn’t have a pretty star-studded career before his brush with Tinseltown. As an academician he spent his career at the California Institute of Technology where he was the Feynman Professor of Theoretical Physics until 2009 when, according to his website, he “stepped down in order to ramp up a new career in writing, movies and continued scientific research.”

Thorne has an international reputation as theoretical physicist and again, referring to his website, his research has focused on “Einstein’s general theory of relativity and on astrophysics, with emphasis on relativistic stars, black holes and especially gravitational waves.” So, it’s easy to see how his research naturally led him to his work with Interstellar.

Shane Larson, a former associate professor of physics and a founder of the popular “Science Unwrapped” series at Utah State University, helps explain the science of what Thorne does. Larson, now a research associate professor at Northwestern University and astronomer in the Department of Astronomy at Chicago’s Adler Planetarium, completed post-doctoral studies and worked with Thorne at Caltech from 2001-04.

“There are a lot of ways to describe all the different things we do in science, but in very broad strokes, there are two pieces of science that we call ‘theory’ and ‘experiment,’ and both are required for science to work,” Larson said.

Theory, Larson said, is how we describe the way nature works.

“Kip and I are ‘theoretical physicists’ because we work mostly on the theory side of things,” Larson explains. “We use the laws of nature to understand how and why the universe is behaving the way it does. In gravitational physics we think about things like ‘how many black holes are made from all the exploding stars in a galaxy?’ and ‘if a black hole spins, does it affect stars around it differently than black holes that don’t spin?’ We ask all kinds of interesting questions like this, and make predictions about the way the universe behaves. Then our experimental friends go look to see if we are right.”

Larson said working with Thorne is something he still remembers fondly, and there are days he wishes Thorne was looking over his shoulder saying, “try explaining it this way.”

“Kip was an awesome person to work with and he is legendary in the gravitational physics community, so as a young scientist coming into his group, there was a bit of star-struck awe you have to deal with,” Larson said. “That said, he is probably one of the most friendly, welcoming and approachable scientists I know.”

Much has been said and written about the science in Interstellar of which Thorne was directly involved. In Larson’s assessment, there are places where the laws of physics have been stretched dramatically for cinematic effect, but there is nothing that he feels was seriously broken.

“All the crazy effects, like time-slippage down on the planet near the black hole, are real effects,” he said.

Overall, Larson thinks Interstellar is a great movie and one of his favorites, admitting he “only saw it five times” and anxiously awaits its release on Blu-ray!

“As a scientist, when I watch science fiction films I know places where filmmakers often take liberties with stretching — or breaking — the laws of physics or where they often get things wrong,” Larson said. “This doesn’t usually bother me too much because I always love a great action movie — I don’t need there to be perfect science.

“But in the case of Interstellar, every time they approach one of those places where they could have broken the laws of physics in some dramatic and cringeworthy way, they do great at getting a good approximation of it being ‘right.’ That, more than anything, points to the presence of a great science advisor like Kip being involved.”

And, for those astute audience members looking for a possible subtle touch by the scientist. Look at the broken down robot on the ice planet. Its name is K.I.P.P.

In addition to his work with the film, Thorne has followed the project up with a new book, The Science of Interstellar described as “a journey through the otherworldly science behind Christopher Nolan’s highly anticipated film …” The book’s forward is by Nolan.

Utah State University awarded Kip Thorne an honorary doctorate in 2000 when he was also featured as the commencement speaker.