It’s been an historic year for the Utah State University club baseball team. Finishing in the conference in first place with an 11 and one record is a feat worth bragging about. Add to that, a USU first, by winning the regional tournament and you’ve already got a season worth decorating. But there’s one more series for the club team to finish before it can end their 2012 season: the National Club Baseball Association World Series!

Utah State will represent the Northern Pacific Region in this year’s NCBA World Series, May 25 – 31 in Columbus, Ga. Entering the series as a five seed, the Aggies are one of the eight teams in the nation who earned the chance to compete.

While honored and excited for this chance to represent USU at a national level, the club team is now yoked with the burden of financing its trip to the World Series. Club sports differ from NCAA sports in a few different ways; one being funding. Club sports are responsible for the majority their own funding.

The USU club baseball team has handled its finances extremely well this season. By “living within their means,” they’ve been able to start with what was a negative budget, and maintain a sustaining season. However, the honor of participating in the World Series was a cost of with no one could have planned.

If you would like to help contribute to the club baseball team’s World Series participation with a tax deductible donation, please visit the team website. 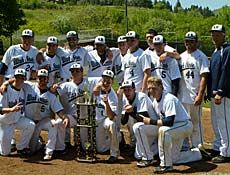