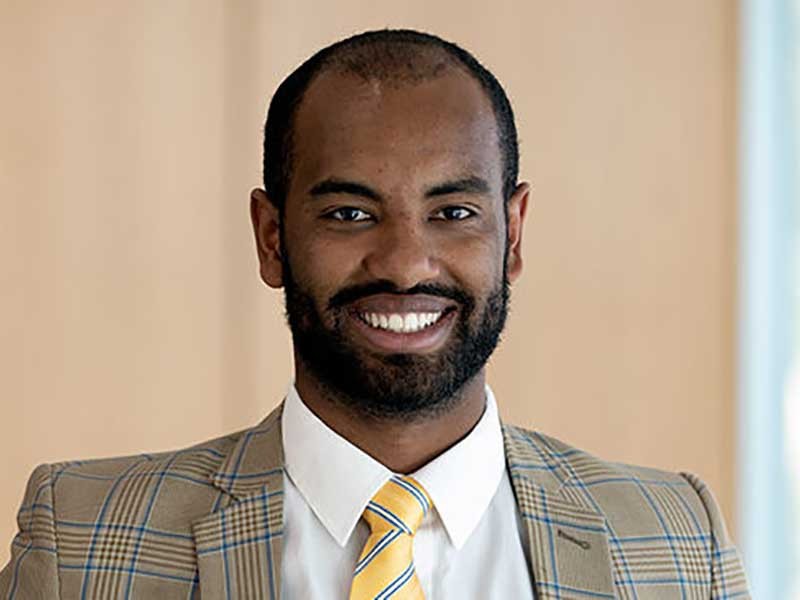 Despite being the underdog candidate, Sami Ahmed came out on top of the Utah State University Student Association presidential election.

Ahmed was inspired to run for office by the Theodore Roosevelt quote in the lobby of Huntsman Hall, which reads: “Far better it is to dare mighty things, to win glorious triumphs, even though checkered by failure, than to rank with those poor spirits who neither enjoy nor suffer much, because they live in the gray twilight that knows not victory nor defeat.”

Ahmed wanted to “dare mighty things” and decided running for USUSA president fit that description. He rounded up a few of his closest friends and went full speed ahead into the campaign.

One such friend was Anna Kremnev. The two met over the course of their business classes, where they worked on group projects and realized how well their respective skills complemented one another.

“We work really well as a team together because we’re always right on the same page, just he’s on the creative side of it and I’m on the practical side of it,” Kremnev said.

Ahmed mentioned his intention to run for office last spring and knew he wanted Kremnev to be his campaign manager for this reason.

Another team member was Toby Kidd, who met Ahmed in their sophomore year of high school. The two became fast friends on the football team and they spent so much time together that they became as close as brothers.

While Kremnev worked on the logistical side of the campaign, Kidd helped out with other essential tasks.

“I was the grunt,” he said. “I was working all day, every day, helping people know what Sami’s about and why they should vote for him.”

Because Ahmed didn’t have the same social media constituency as some of the other candidates, he campaigned the old-fashioned way, with careful and deliberate interpersonal contact. He courted his constituency month by month until he could finally ask for their vote during campaign week.

“Life is always worked out. I don’t necessarily plan things, I just kind of do things,” Ahmed said. “I move my feet and open my mouth and get to know people, and life just kind of works out.”
Though they had some setbacks during the campaign, the team knew that they would get as much out of the election as they put into it. This determination helped them push through with positivity.

“Hard work is how we get good results,” Kidd said. “I really don’t think there are people that I know that work harder than Sami.”

Though Ahmed has never been involved with USUSA before, the people who know him best express great confidence in his ability to overcome any challenge, especially in his new role as president.

“He definitely does take it head-on,” Kidd said. “If he wants to figure it out, he definitely will. I have no doubt in Sami.”

Ahmed readily recognizes his inexperience in many areas related to his new occupation, so he surrounds himself with people who excel in those areas.

Kremnev expressed that Ahmed’s lack of prior experience will likely work in his favor. “He’s going to get a lot of things done because he doesn’t know that they can’t be done,” she said.
Ahmed’s fresh perspective drives him to try harder and work more collaboratively with his USUSA team members. Now that he is president, everyone is looking forward to seeing how his platform will be carried out.

Some of Ahmed’s main goals are to revamp the university website, including tuning up the search engine. He also wants to understand how the culture of USU can be celebrated and improved.

Another of his main ideas is to promote a multicultural focus, aiming to increase funding for international events and make USU more accessible for more students. This, he hopes, will help people feel connected to each other on a deeper level. Ahmed said that these connections are an important element of being an Aggie.

“You can be anyone, and I know it’s pretty predominant to one side, but that doesn’t stop you from finding a place and being happy,” he said. “As a black guy, I’ve never felt out of place. I’m almost always the only black guy in my class, but I’ve always felt like I could share my opinions and they would take those opinions as valid as anyone else’s.”

Kremnev noted how important this approach will be. “Sami’s got a unique perspective,” she said. “It’s actually what he understands himself that he could help others with.”

Ahmed hopes to create spaces where students can take advantage of resources and opportunities that are right at their fingertips but that they may not know about.

“I feel like we can do better at letting our students know what’s available to them to aid them outside of their classrooms,” Ahmed said. He believes Aggies are cut from the same cloth as people attending Ivy League schools and that promoting resources and networking will keep us there.

Ahmed recognizes that the struggles of students vary widely between colleges and disciplines. By getting to know students from every corner of campus, he hopes to have a thorough understanding of what people need and how to address those needs.

Kremnev described Ahmed’s ability and desire to care for others. “He is definitely just really kind and compassionate,” she said. “He has this innate desire to help whoever as much as possible.” Ahmed hopes he can cultivate his passion for caring for others into a profession as a doctor.

Right now, Ahmed is excited to contribute where he can during his administration. His vision extends past this year into the future where the next president can pick up where he leaves off.

“What I want people to know about me is I love life, and I want to get to know you and talk to you,” Ahmed said. He hopes to see ideas coming in from every avenue and encourages students to talk to him.

Those interested in contacting any member of the USUSA Executive Council can find their information at https://ususa.usu.edu/student-association/contact/directory/executive-council.