Contemporary theatre is a crucial element in education and life, said professor Kevin Doyle during his Inaugural Professor Lecture at Utah State University. It is important to students of theatre and beyond.
“Contemporary theater is important for both university and community, and new plays are essential for a strong education,” Doyle said.
The Inaugural Professor Lecture Series at USU is coordinated by the provost’s office and is hosted by President Stan Albrecht and First Lady Joyce Albrecht. Faculty members in the series have been promoted to full professor within the last academic year and present a lecture that highlights their research, creative activity or teaching at the university.
Doyle recounted his experience as a college student, when he met others who held a less-than-respectful attitude about theater. As he studied, however, he learned its value.
“Through the study of theater I discovered what true art is,” he said. “I feel it is essential that the same understanding of theater as art, as well as other forms of art, should be studied, appreciated and understood by all college students as basic elements of their education. Not all study can be completely in context with their world, especially if it excludes contemporary and challenging theater.”
Doyle’s lecture was a call to arms, of sorts. He believes there should be a serious investment in the arts and an effort to include the arts in other curriculum areas across the university.
“I see the danger presently on our campus where theater and the other arts are fading into the background,” he said. “The arts provide life-lessons that cannot be learned in the laboratory and I would like to see greater support of the arts on campus, and especially the contemporary element.”
Doyle, a native of St. Louis, received his theater education at Saint Louis University where he earned his bachelor’s degree in theater. He completed a master’s of fine arts in acting and directing from the University of Missouri – Kansas City. He has been a faculty member at USU for 13 years, and in 2005 was the USU Teacher of the Year in the arts division. He became a full professor at USU last spring.
He has directed numerous productions for the Department of Theatre, and highlights include Sweeney Todd, Twelfth Night, The Laramie Project and All My Sons, which recently concluded its run. He has also directed for the department’s summer program, the Old Lyric Repertory Company and has appeared in more than 20 OLRC productions.
In addition to his creative work on campus, Doyle is an active professional actor. He has been a member of Actors’ Equity Association for 20-plus years and has performed in more than 70 regional productions in Chicago, St. Louis and Kansas City and has more than 100 commercial credits.
Doyle’s professional work is a source of stimulation and inspiration for his work in the classroom.
“My professional work is essential to legitimize what I do in class,” he said. “A majority of professional theater — 85 percent or more — is comprised of contemporary works and all theater approaches productions and performances in a contemporary frame of mind,” Doyle said. “I have to keep active to be able to bring the current thoughts and practices back to the classroom. I can’t imagine any field of study that doesn’t expect field work in its professional realm. Theater can’t be any different.”
Doyle often performs in Salt Lake City, with both Pioneer Theatre and the Salt Lake Acting Company. During last season he played eight roles in Sherlock Holmes and the West End Horror at Pioneer Theatre and in The Water Project for SLAC. This spring he returns to SLAC for a production of Rounding Third, a two-man show dealing with two little league baseball coaches with opposing points of view on practice and competition.
“I’m also excited about my sabbatical in the 2007-08 academic year,” he said. “In the fall I’ll spend more than three months with the Semester At Sea Voyage.”
During that time Doyle will teach, while visiting ports around the world from Ensenada, Mexico, to Ho Chi Minh City, Vietnam, to Dubrovnik, Croatia.
Doyle also coordinates several programs that bring professional actors and companies to USU for workshops and performances, including Actors from the London Stage, a company that will make a repeat appearance in Logan this season. The company will provide workshops on campus and will present Shakespeare’s Hamlet in late October and early November. Among the professional actors who have conducted workshops is Euan Morton, who received a Tony nomination and an Olivier Award for playing the lead role of Boy George in Taboo in the New York and London productions.
Remembering his student days, Doyle recalled the day he realized he was making true discoveries in his theater classes. He also realized he could apply the same way of thinking in other classes and, in turn, those classes would help him even more in theater.
“The best actors are educated actors,” Doyle said. “I get excited when I see my students make the same discoveries and light up about the potential education has for them.”
Contact: Kevin Doyle (435) 797-3022
Writer: Patrick Williams (435) 797-1354, patrick.williams@usu.edu 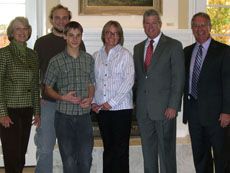 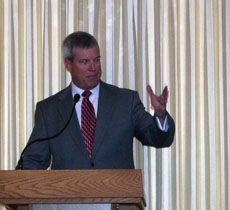 Doyle discussed the importance of the arts in education today. 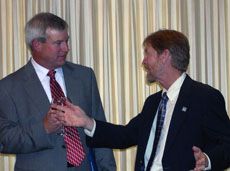 Gary Kiger, dean of the College of Humanities, Arts and Social Sciences (right) talked with Doyle during the reception. 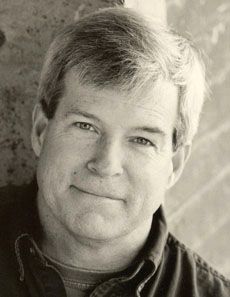