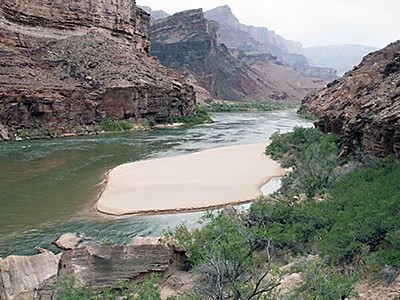 In a warming world of inevitably decreasing runoff and increasing human needs, rehabilitating parts of the much-dammed and much-diverted Colorado River is an immense challenge that requires identifying river segments were tractable strategies can be implemented. The Colorado River downstream from Glen Canyon Dam in the Grand Canyon region is one such place say U.S. Geological Survey scientists, many of whom have a long association with Utah State University.

“The U.S. Department of Interior’s High-Flow Protocol, adopted in 2012, is yielding positive results in terms of building larger sandbars,” says Schmidt, professor in USU’s Department of Watershed Sciences, who recently returned to Utah State after serving as USGS/GCMRC chief for the past three and a half years.

Following construction of northern Arizona’s Glen Canyon Dam in 1963, river runners, national park managers and scientists observed the river’s downstream sandbars in Grand Canyon National Park were eroding because most of the fine sediment once transported through the canyon was being trapped in the newly formed Lake Powell reservoir. Once a distinctive attribute of the river landscape and extensively used by river runners, the sandbars were no longer replenished during annual spring floods and were progressively eroded by normal dam operations.

Schmidt was among river experts who conceived a series of controlled floods — “high-flow experiments” — conducted as releases from Glen Canyon Dam in 1996, 2004 and 2008. These experiments laid the scientific foundation for the 2012 High-Flow Protocol, which provides regulatory and administrative approval for controlled flood releases from the dam when conditions allow.

“The Protocol requires substantial effort on the part of USGS/GCMRC scientists and Bureau of Reclamation engineers,” Schmidt says. “And this partnership between river scientists and engineers is working and is successful.”

In order for controlled floods to successfully restore sandbars, sufficient sand must be available to be redistributed by controlled floods. The sand is delivered to the Colorado River by the Paria River, a small tributary stream whose headwaters are in Bryce Canyon National Park.

Flash floods occur in the Paria in some summer and fall seasons, Schmidt says, and the Protocol establishes that controlled floods are released in late fall in any year when sand inputs from the Paria have been especially large.

“The long-term fate of Grand Canyon’s sandbars will be determined by nature — that is, whether or not favorable sand inputs from the Paria River continue,” he says. “The Protocol allows dam managers to take advantage of these sand supplies whenever they are delivered to the Colorado River.”

Approximately 40 million people in seven U.S. states and Mexico depend on the 1,500-mile-long Colorado River for water and power. In addition to human demands, climate change projections predict increases in temperature and decreases in Colorado River runoff.

“To restore the Colorado, you have to have floods and you have to have sand,” Schmidt says. “We’ll never be able to replicate pre-dam conditions, but the controlled floods give us a chance to restore at least some of river’s critical habitat.” 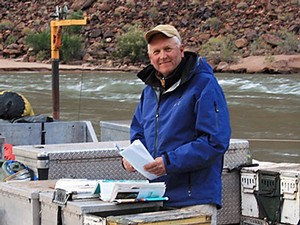 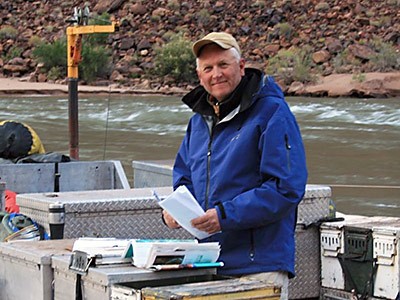