As September’s Machine Gun Fire raced across Utah’s Camp Williams and destroyed nearby homes, Utah State University scientist David Stoner wondered about the fate of the area’s mountain lions.
He wasn’t concerned about the cougars being in immediate danger. With summer barely waning, the cats are still high in the mountains. But in coming months, when snow begins to fall, the lions’ quarry will make their way to winter ranges and the felines will follow. Charred areas of Camp Williams provide a portion of that winter range and, this year, will offer little sustenance.
“Oak brush, like that found at Camp Williams, is a critical plant community for big game animals,” says Stoner, a doctoral student in USU’s Department of Wildland Resources. “But because of development, there’s very little oak brush left in the Salt Lake Valley.”
Wildfire is a common, expected occurrence in oak brush communities. Gambel oak, which fueled the recent wildfire, will rebound quickly. In terms of size, the Machine Gun Fire — so called because it was ignited by live artillery rounds — was relatively small. Generations of caretakers at Camp Williams, founded nearly 100 years ago, have dealt with wildfire as a matter of course. The difference now is the National Guard training site’s proximity to newly established residential areas.
Wildfire may consume winter range faster than development. But rangeland taken for development doesn’t return.
With faculty advisor Mike Wolfe, Stoner is studying how cougars respond to changes in the landscape caused by human uses and, in particular, how the animals use the wildland-urban interface.
Initiated in 1996, Wolfe’s concurrent studies of two Utah cougar populations, one including inhabitants of Camp Williams and adjoining land owned by Kennecott Utah Copper, and the other of lions in the Monroe Mountains of central Utah’s Fishlake National Forest, form the longest continuously running comparative study of mountain lions in the world. The work is funded primarily by the Utah Division of Wildlife Resources, along with support from Kennecott, Camp Williams and private conservation groups.
The researchers currently have 12 cougars in the Oquirrh Mountains area wearing GPS collars, which allow the scientists to continually monitor the cats’ movements. Within days of the Machine Gun Fire, Stoner was able to confirm the location of a collared female who lives on Camp Williams land, along with her litter of kittens.
At 44 square miles, Camp Williams may seem an amply roomy habitat for cougars. But the annual range for female lions is about 30 square miles; two to three times that for males.
The cats’ primary prey, mule deer, readily wander into human-inhabited areas. Stretches of Redwood Road adjacent to Camp Williams are frequent sites for deer-vehicle collisions and sightings of deer are often reported by residents of the Oquirrh foothills. A question explored by Stoner is whether or not cougars will venture into the same areas.
The answer is yes, they do, but not frequently and, when they do, they’re usually out at night, they don’t stay long and they avoid humans.
“What we’re finding is that cougars don’t show a strong tendency to use human-impacted landscapes,” he says.
In contrast to other mammals, such as deer, raccoons and bears, which exploit access to food sources left by humans, lions seem especially wary.
“You might expect cougars to follow their quarry into urban areas but that doesn’t seem to be the case,” Stoner says. “It’s possible that it’s easier for them to catch their prey in deeper snows at higher elevations and, as long as there’s enough prey, there’s no incentive to follow deer into risky habitats, such as those along the wildland-urban interface.”
A winter of heavy snow could change that, he says, as will continued development that forces a greater proportion of the deer herd to winter in urban areas.
Stoner observes that while the Salt Lake Valley still has a fairly substantial agricultural buffer, which serves as winter range for deer, elk and other animals, the “city is getting closer to the mountains.”
“The cougars’ prey base is definitely moving toward town,” he says. “The wildland-urban interface is widening and, despite the cougars’ elusive and wary behavior, we can expect there to be more interaction between humans and cougars.”
Related links:
USU Department of Wildland Resources
USU College of Natural Resources
Contact: Michael Wolfe, 435-797-2533, michael.wolfe@usu.edu
Writer: Mary-Ann Muffoletto, 435-797-3517, maryann.muffoletto@usu.edu 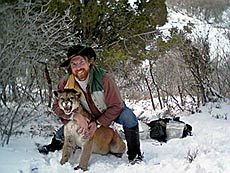