T minus 14 days and counting… A team of Utah State University students is busily preparing an innovative thermal transfer experiment — and themselves — for the rigors of microgravity flight.
USU’s Get Away Special “GAS” Team is one of 14 student groups selected for participation in NASA’s 2010 Reduced Gravity Education Flight Program, also known as “Microgravity University.” Nine Aggies travel to Houston’s Johnson Space Center June 17-26 to fly their experiment aboard NASA’s KC-135 microgravity aircraft, infamously known as the “Vomit Comet.”
“This is about as close to space as you can get without being an astronaut,” says 2010 USU Goldwater Scholar Justin Koeln, leader of the team’s experiment, “Follow-up Nucleate Boiling On-flight Experiment” or FUNBOE.
Flying aboard the KC-135 with Koeln are GAS teammates Rob Barnett, Andrew Fassmann, Frank McCown, Troy Munro and Stephanie Peterson. Accompanying the group to Houston are alternate flyer Travyn Mapes and ground crew members Phillip Anderson, who serves as GAS team leader, and Cameron Peterson. (More information about USU’s NASA Microgravity University team is available online.)
FUNBOE builds on a previous USU GAS experiment flown aboard Space Shuttle Endeavour in 2001. Developed by USU’s then-GAS team and students from Utah’s Box Elder High School, the original experiment explored the boiling dynamics of water in microgravity.
“We analyzed data from the initial experiment and determined that more research is needed,” Koeln says. “Nucleate boiling would be ideal for thermal management systems but its dynamics in microgravity are not well understood. If we can prove that boiling water in space is practical and safe, we’re on our way to developing more efficient energy systems for long-duration space travel.”
Koeln and his teammates agree that providing robust, efficient and reliable thermal management for space exploration vehicles is essential for ambitious plans to travel to Mars and beyond.
Aboard the KC-135, the Aggie researchers will experience weightlessness as the specially outfitted military transport jet dives from 30,000 to 20,000 feet in a series of controlled 25-second free falls over the Gulf of Mexico. Each of the team members traveling to Houston will undergo several days of physiological training at NASA’s astronaut training facility in preparation for their flight.
“I’m excited but not too nervous yet,” says McCown, a computer science major. “I’ll probably feel nervous right before we fly.”
The USU team has been working since early January to build and ready their experiment for the Houston trip. In addition, the team has been involved in a busy outreach schedule. In the past year, they’ve presented at numerous local schools to more than 1,000 K-12 students. They’ll continue their outreach efforts during the coming year.
The GAS team invites the USU community to come along on their journey by joining the team’s Facebook page or visiting the team website.
Related links:
Contacts: J.R. Dennison, 435-797-2936, jr.dennison@usu.edu; Troy Munro, troy.munro@aggiemail.usu.edu
Writer: Mary-Ann Muffoletto, 435-797-3517, maryann.muffoletto@usu.edu 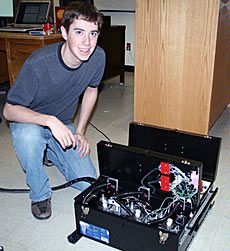 Student Justin Koeln kneels beside the portion of the experiment that will float in air aboard NASA's Vomit Comet. It contains clear 'cells’ equipped with video cameras that will record the behavior of boiling water in a weightless environment. 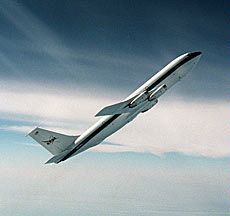