An employee at Utah State University’s Center for Persons with Disabilities spent 16 days on a humanitarian trip to Haiti following the devastating earthquake that hit the country.
It was a colorful experience — literally. A photo album on the CPD's Facebook page showcases George Wootton’s pictures, which show both the devastation in the city and the smiling resilience of the people.
Wootton went to Haiti with a group of 130 volunteers to Port-au-Prince through the Utah Hospital Task Force. He took with him his medical skills as a family nurse practitioner. At the CPD’s Medical Clinic, he provides mental health evaluations, medication management and case management services.
The earthquake at Port-Au-Prince killed more than 200,000 people and brought many homes and buildings down, causing widespread hardship. Wootton said he saw corruption — food that was supposed to be free was being sold on the streets, for example — but he also saw people who accepted their circumstances with remarkable grace.
“Nobody asked me for pain medication,” he said, though he saw people who obviously needed it. “There seemed to be an amazing patience.”
Once, at an orphanage, he was working with an interpreter to understand the patients’ histories, focusing hard. A sound broke his concentration, which he said annoyed him until he realized it was singing. The music went on for 20 minutes as people at the Baptist orphanage sang hymns — in English — to thank those who came to help.
“It was truly one of the most moving moments when I was there,” Wootton said.
During the first part of the trip he worked in acute/chronic care area in one of the few structurally sound buildings at the University Hospital, dealing with patients who had both injuries and underlying health problems. Later, he worked outside in tents set up to treat the wounded. He performed rapid assessments, identified infections and hydrated people who needed it.
Dehydration was a common enough problem in the hot, humid weather that Wootton ended up needing IV hydration himself. He’d been so busy that he forgot to keep drinking.
“It was pretty much chaos for the first couple of days,” Wootton said. Much of his time was spent at the University Hospital in Port-Au-Prince. Many of the hospital’s staff members were dealing with their own personal tragedies, leaving the hospital short-handed and disorganized. Later, when the regular staff returned, the work became easier, he said.
He spent the end of the trip at the Healing Hands for Haiti compound in the medical care tent. Before the earthquake, Healing Hands had rehabilitation and prosthetic manufacturing facilities in its compound. The buildings were 80 percent damaged or destroyed, though its guest house remains standing (it needs structural repairs).  The organization’s future is still being worked out, though its Web site announces that plans to build Haiti’s first Physical Medicine and Rehabilitation Institute have been stepped up.
Wootton said his home away from home was in a compound of tents, pitched on a fenced soccer field and protected by the U.S. Army’s 82nd Airborne. The security was good, maybe too good, he said.
Wootton said he hopes both to return to Haiti and to involve the CPD in working with people with disabilities in that country. Rough estimates put the pre-earthquake number of Haitians with disabilities at 800,000, and the earthquake will surely add more to that number.
But while he plans to return, Wootton said his view of the international role in Haiti has changed since he went there.
“There is always going to be a need for international guidance, but Haiti needs to be healed by Haitians,” he said.
Related links:
Center for Persons with Disabilities
Emma Eccles Jones College of Education and Human Services
Writer: JoLynne Lyon, 435-779-1977, jlyon@cpd2.usu.edu 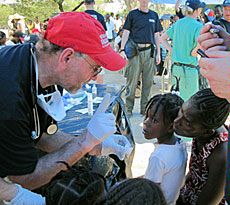 George Wootton, an employee at USU's Center for Persons with Disabilities spent 16 days on a humanitarian trip to Haiti following the devastating earthquake that hit the country. 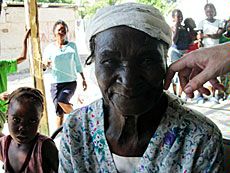