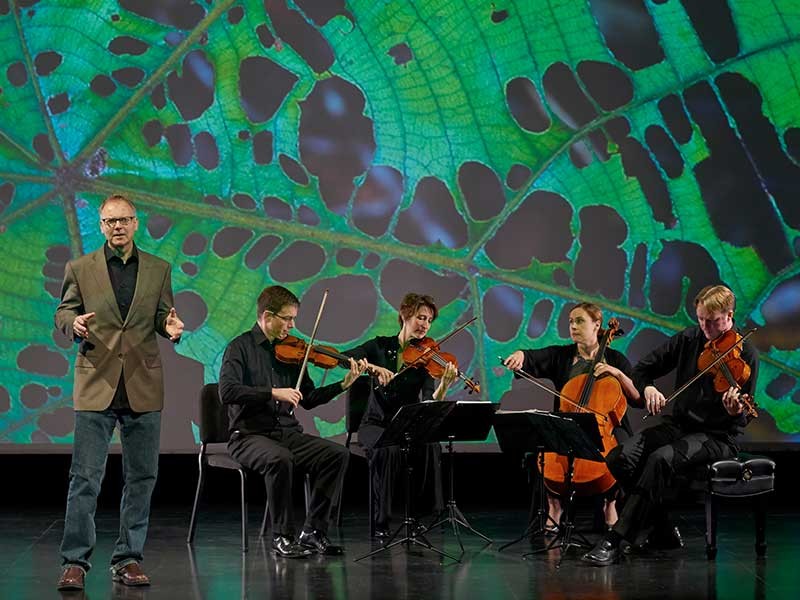 “Some scientists are fabulous communicators,” says Davies, associate professor of professional practice in USU’s Department of Physics. “Still, communication is not what scientists are traditionally trained to do. Any time we can collaborate with artists, then, is a real opportunity to change the game, because the Arts excel at connecting us with stories on a human level.”

Davies is founder of The Crossroads Project, a collection of artists – and a physicist – who combine science, music, visual art and photography to convey humanity’s impact on the planet. With the renowned Fry Street Quartet, which holds the Dan C. and Manon Caine Russell Endowed String Quartet Residency at USU’s Caine College of the Arts, Davies has traveled throughout the United States, to Mexico and to Brazil, to impart critical science and spark action.

To date, The Crossroads Project has created two separate performances – Rising Tide, which premiered at USU in 2012 and has been performed extensively, and Emergence – an experimental version, which premiered in 2016 and is still under development.

“Grounded in science, elevated by art, igniting response,” as described by its website, The Crossroads Project performances are neither concerts nor plays.

“It’s a performance experience,” Davies says. “And not an entirely pleasant experience. But it has proved powerful and thought-provoking.”

The performance is further complemented by the visual art of New York-based painter Rebecca Allan and the environmental photography of International League of Conservation Fellow Garth Lenz.

“During my years as a postdoc at Oxford, I had powerful experiences with chamber music,” he says. “I could have attended a concert almost every night, had I wanted to.”

“I’d walk into a concert with a complicated quantum optics physics problem on my mind and the music would send me scrambling for a notebook,” he says.

Those experiences laid the groundwork for the approach Davies sought with The Crossroads Project.

“I hoped the performance experience we provided would push away obstructing thoughts and replace them with compelling information about a critically important issue,” he says.

The Arts, Davies explains, have the ability to connect us to important issues on a visceral level, not simply to understand them on an intellectual level.

“Take the example of the role of Harriet Beecher Stowe’s seminal novel, Uncle Tom’s Cabin, in ending slavery,” he says. “It became widely popular throughout the world after its debut in 1852 and moved people to action. This single piece of literature did what hundreds of abolitionists, who’d lectured for years about the evils of slavery, couldn’t do.”

It’s the same for scientists.

“We have compelling, scientifically based evidence of the damaging effects of human activity upon our environment,” Davies says. “Yet the perceived policy, economic and social implications of confronting our lifestyles and doing something to reverse our course generate enormous resistance.”

He hopes The Crossroads Project provides an impetus – audience by audience – to change hearts and minds and spark action.

“Change of this scale requires knowledge, commitment and community,” Davies says. “No one can do everything. So, we encourage those in our audiences to ‘pick something and make it yours.’”

Davies is part of the wider network of air, land and water researchers at USU currently being spotlighted by the #USUResearchLandscapes program. Learn more about the program and its public presentations, which begin Feb. 26, at the Research Landscapes website. 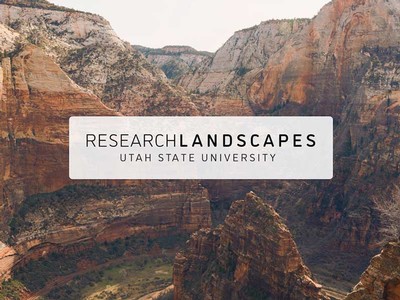 Davies is among air, land and water researchers at USU currently being spotlighted by the Research Landscapes program, led by USU's Office of Research. The program’s first public gathering is Feb. 26, in Salt Lake City. 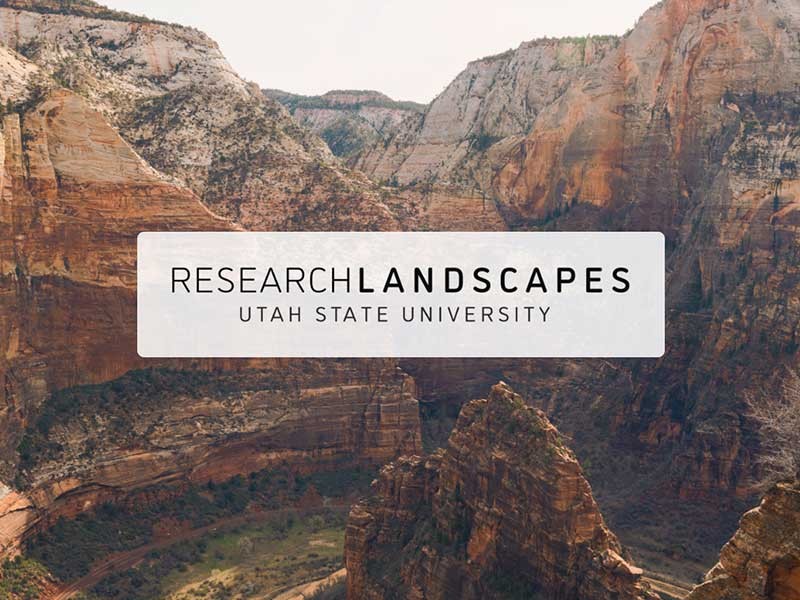