Cell biologist Daryll DeWald loves to chase the big discoveries as much as the next scientist. But he concedes that the human side of science is the most fascinating of all.
“To loosely borrow Bill Clinton’s 1996 campaign phrase, ‘It’s about people, Stupid,’” DeWald told family and friends who joined him Jan. 30 at the President’s Home for the ninth talk in Utah State University’s 2006-07 Inaugural Professor Lecture Series. The series highlights the accomplishments of university faculty who have been promoted to full professor in the past year.
Head of the Biology Department in USU’s College of Science, DeWald says he wanted his lecture “to celebrate the people I’ve interacted with” in an academic and professional journey that’s taken him throughout the United States.
Not that DeWald has ever been a stranger to relocation. A self-described Air Force brat, his family moved about every two years during his childhood. Each new home – in Texas, Louisiana, Colorado, Ohio, Okinawa, California – afforded varied environments for the budding scientist to explore. DeWald clearly remembers his fascination with ant lions in the Mojave Desert. The youngster scouted out the insects’ inverted cone-shaped homes and watched hapless ants try to escape the traps of fine, slippery sand.
“I called them ‘doodlebugs,’” he says. “I wondered how big of an ant they could eat.”
As he entered his teens, athletics vied with science for DeWald’s attention and he dreamed of earning a baseball scholarship to college. Alas, the scholarship didn’t come, but DeWald headed to the University of Wyoming where his interest in scientific pursuits was reignited. At UW, DeWald met molecular biologist Randy Lewis, who became a significant mentor and friend.

“We studied endorphins and enkephalins – painkillers naturally produced by the body – and I had my first opportunity to publish my research,” says DeWald.
His own academic experience may explain why DeWald is a strong advocate for undergraduate research. “I have a real heart for undergrads,” he says. “Pairing students with faculty mentors and involving them in meaningful research is critical to a positive, productive experience.”
Following graduation from UW, DeWald worked as an industrial scientist for pharmaceutical giant Upjohn. His areas of research included cancer biology and biopolymer chemistry. And co-workers approached him about being an alpha-tester for a promising new hair loss treatment. DeWald declined but recounts the memory with ironic amusement pointing to his own hirsute-challenged head. The resulting product was none other than bestseller Rogaine.
DeWald headed back to academia and earned his doctorate in plant biochemistry from Texas A&M University. Postdoc studies followed at the prestigious Howard Hughes Medical Institute at the University of California, San Diego School of Medicine. He joined USU’s faculty in 1995 and, prior to his appointment as Biology Department head in 2006, he served as associate director for research for USU’s Center for Integrated BioSystems.
DeWald’s research interests span yeast, plant and mammalian cell signaling.
“We’re exploring what happens inside cells, how new proteins are made – protein trafficking, if you will.”
In each organism, DeWald is examining the role of phosphoinositides – a form of lipids that regulate key cellular processes. With plants, he’s exploring how varied species respond to drought, salt and heat stress. In mammals, he and colleagues are studying the role of phosphoinositides in breast cancer metastasis.
The latter research has become a personal mission, as two of DeWald’s extended family members are currently battling breast cancer.
“I don’t see my role as just meddling about in a lab,” he says. “I want to be doing things that help humankind.”
In his pursuits, DeWald draws upon lessons learned from mentors, colleagues and students who have demonstrated strong moral positions. One of those mentors was his late father.
“He invested in others, treated people with respect and valued them,” says DeWald. “That’s the kind of leadership model I try to emulate.”
Related Links
Contact: Daryll DeWald [dewald@biology.usu.edu], 435-797-1909
Writer: Mary-Ann Muffoletto[maryann.muffoletto@usu.edu], 435-797-1429 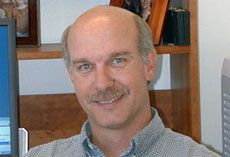